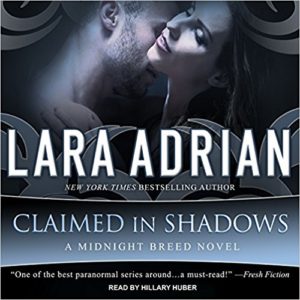 Aric Chase is trained and ready to finally take up his own position within the Order. As the day-walker son of two of the most formidable Breed, he is nearly royalty within the Order and Breed society. But he works hard and is ready to prove himself when his special gifts are needed for a covert mission in Montreal.

Meanwhile, Kaya was raised by an abusive mother and in poverty. She never understood what family could be like until she became a trainee of the Order and friends with Mira. Now Kaya works hard to prove herself and become a member in her own right, but if her past ever comes to light, she may lose everything.

Claimed in Shadows is the fifteenth book in the Midnight Breed series, and the fifth since “New Dawn,” when the author shook up her world and moved it 20 years into the future. I honestly wasn’t certain I was going to stick with the series as it just hasn’t been as solid and consistent since the changes. However, the opportunity to listen and review this audiobook presented itself, and I’m so glad I took it. Between the exciting story and Ms. Huber’s narration, I’ve come to enjoy and appreciate the Order all over again.

Claimed in Shadows is exciting and engaging. I like that the focus was fairly narrow, keeping side stories relevant to the overall plot and staying away from the Atlantean storylines. The Order is working to take down Opus Nostrum (ON) and its associates, yet ON seems to always know what the Order’s plans are. There is a pretty good twist in this one, and I like how it played out.

Kaya and Aric are friendly from the start. Although she’s human and fairly new, Aric treats Kaya as his partner and equal. They allow their mutual attraction to burn and dance around the fact that he’s going to be leaving as soon as their mission is complete. Both are considerate and thoughtful, which makes things work out for the better, even when Aric discovers Kaya has been lying to him and the Order. I appreciate why Kaya kept her secrets and the severity was enough to place fear in her that Aric would not want her, but he and the Order recognize why she did what she did and forgave her.

Ms. Huber provides a lovely narration for the title. Her narrator voice is very matter-of-fact and straightforward. Yet every character has a unique voice. Ms. Huber supplies a large variety of fabulous accents. I like that the voice she picked for Aric is youthful. It’s more like a young man (which he is) than a roughened warrior. It suits his station, although at least twice Kaya comments about Aric’s deep voice. Kaya’s Franco-American voice was sharp yet smooth, just like her.

Overall, Claimed in Shadows as narrated by Hillary Huber reignited my interest in the Midnight Breeds series.  I found the combination of the solid storyline, steamy romance, and lovely narration, both exciting and entertaining.

As the son of a formidable Breed warrior, Aric Chase has been devoted to the Order all his life. With his training completed, all he needs is one successful mission before he can join the fight to destroy the Order’s chief nemesis, Opus Nostrum. His rare ability to daywalk lands Aric an assignment in Montreal, where he learns he’s to be teamed with another new recruit, a beautiful, but tough-as-nails Breedmate named Kaya Laurent.

Independent and driven, Kaya wants nothing more than to become a full-fledged member of the Order. Having grown up in squalor and neglect on the streets of Montreal, she longs for the close-knit family she’s found during her training to be a warrior. Eager to prove herself, she is thrilled to be given the chance at a key operation—even if she must share the mission with an arrogant, far-too-seductive Breed male who’s practically Order royalty.

Their unwanted partnership soon erupts into a desire neither of them can resist. But when Kaya’s past reaches out from the shadows to call her back, she must decide between protecting a dark alliance that could shatter her dreams of joining the team and a truth that could not only forfeit Aric’s faith in her, but bring the enemy right to the Order’s door.