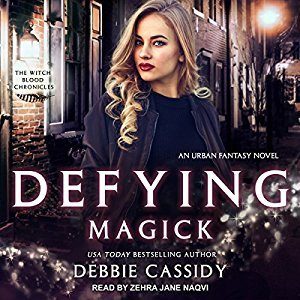 Defying Magick is a wonderful sequel to Binding Magick in the Witch Blood Chronicles series.  I enjoyed the continuing saga of Carmella and the unknown threat to humanity.

Defying Magick takes place shortly after the conclusion of Binding Magick.  Carmella’s asura power has been unlocked and is surging forward.  As Carmella attends a yaksha gathering with her new friend, Honey, the unthinkable happens.  Beings appear from nowhere and begin to slaughter friends and family.  Carmella tries to help, but there is nothing to be done, most of the yaksha are eliminated.  This leaves Honey as the new Alpha of the pack.  When Carmella tries to offer support as Honey meets with the other pack Alphas, her asura power comes out in a vengeance; in the shape of a dragon.  With her new position with the IEPEU, Carmella is determined to track down the culprit and bring surcease to Honey. Unfortunately it puts Carmella in the culprit’s cross-fire.

I continue to really love Carmella; she’s loyal, determined, compassionate, fierce and yet kind. Though the novel is compact, it is not lacking in character development or action.  I really enjoyed following Carmella as she tracks down the person responsible for the attacks while trying to acclimate to the new asura powers and its detractions.  Between her and her friends, the camaraderie is enthralling and endearing.  Though there is a bit of a love triangle, Carmella is smart.  She takes her time to grieve what can never be and take the time to heal before jumping into something too quickly.  It’s tough to not be able to not only relate to Carmella but root for her.

It was completely surprising to find out who the ultimate nemesis was.  That being said, the cliffhanger ending was nail-bitingly fascinating and irritating.  Though it appeared that the threat is over, I agree with Carmella that more is to come.  Between the mysterious ending, the surprising appearance of Mira and her surging asura needs, I look forward to knowing what happens next in this series.

Ms. Naqiv continues to be the voice of Carmella.  I love her portrayal of not only Carmella’s personality, but he voices and characterization of the other characters. Though I admit the British accent sometimes throws me for a loop, I really enjoy it.  I can’t imagine listening to this series without Ms. Naqiv’s voice singing through my head.

Defying Magick is an excellent installment in the Witch Blood Chronicle.  I eagerly look forward to what happens next for Carmella and in this world.  If you are looking for something a little different in the urban fantasy world, I heartily recommend this series.

Death comes in many packages, and sometimes it comes in several at the same time…

Carmella’s obligation to the djinn is over, so why does the world feel a little bleaker? There’s barely time to ponder before a horrific massacre leaves her in charge of her first case with the IEPEU. Under the watchful eye of the organisation’s top investigator, and with the help of her friends, Carmella must uncover the identity of the supernatural creatures behind the attack and expose the person pulling their strings.

If that wasn’t enough, her asura power chooses this case to surge to the surface. Now Carmella must quickly learn to master a force bigger than she could ever have anticipated. Because Carmella is on a hit list, and the person that wants her dead will do anything to uncover her weaknesses, except this time Carmella won’t be taken by surprise. This time she’s not going down without a fight.