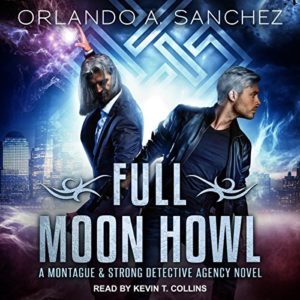 This second installment in the Montague and Strong Detective Agency series was just as nail-bitingly exciting and humorous as the previous novel.  Though we learn a bit more about Monty, we still do not have the whole story behind Simon.

Full Moon Howl begins as a simple case of a sick werewolf but quickly morphs into something far more sinister; revenge against Monty and all those deemed unnatural.  Monty and Simon must race against the clock to stop the annihilation of paranormal creatures while also keeping Monty from succumbing to the dark side of magic.  While Simon and Monty are tracking down the culprit behind this plot, we meet a few people from Monty’s background. Much to Roxanne’s chagrin, an ex from Monty’s past appears and inserts herself into Monty’s recovery.

With Monty’s love life being in a bit of upheaval, Simon’s on-going romance with Chi is still odd.  Maybe there was a novella or I am just not remembering everything that occurred in the previous novel, but it seems they finally went on a date.  But with everything that happens with Monty, the enraged werewolves, renegade mages and a vengeful dragon, Simon’s plate is pretty full and there was little time in it for him and Chi – except for everyone mentioning “the date” and being suspicious of seeing Simon with Monty’s ex.  Especially since the mage behind the enraged werewolves seems to be hell-bent on not only making Monty look like the guilty party, but also annihilate in him the process.

As in the previous novel, Simon and Monty’s adventure was gripping and thrilling, punctuated with humor and cultural references. I continue to enjoy Mr. Collin’s narration.  He seems to not only capture the personalities of the characters, but convey the urgency and desperation of the situations.  I eagerly look forward to the next novel in this series.

My Ratings:
Story: B+
Narrator: A
Overall: A-

Broken bodies and bloody messages are appearing in the darkest corners of New York City. Infected werewolves are roaming the streets attacking innocents.

The Dark Council demands answers. They summon Simon and Tristan to investigate. The evidence points to the work of a powerful mage, unfortunately, there is only one mage in the city powerful enough to cause this kind of infection-Tristan Montague.

Now, Simon and Tristan must locate the source of the magical infection before the Dark Council declares Tristan a dark mage, destroys the werewolves, and shatters the fragile peace in the supernatural community.

Join the Montague and Strong Detective Agency while they are hunted and chased. All while trying to uncover the identity of their unseen enemy before it’s too late!