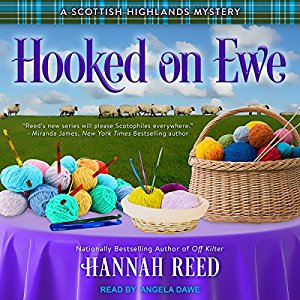 Hooked on Ewe is the standalone, follow up mystery to Off Kilter. Eden Elliot has been in Glenkillen for about 3 months. She’s working and living on Vicky’s farm. She’s made friends and finished the first draft of her book. Christine still isn’t very warm and fuzzy but it’s all okay. Until, the farm hosts a large charity event and Eden discovers the corpse of one of the town’s volunteers. Inspector Jameson has his hands full and asks Eden to be a Special Constable to help him on the case.

Overall, I enjoyed my return to the quaint town of Glenkillen. Seeing the tapestry of land, the food, and the people of the Highlands through the eyes of Eden is wonderful. From her descriptive looks at the scenery, the tastes of the foods and drink, and even the yarn produced and sold at Sheepish Expressions; it’s all brought to vivid life though her observations.

The mystery was engrossing. I liked Eden’s larger roll in the investigation. However, there were a couple small things that made it not as great as the first book – first, as Eden’s character development progresses in this second book there were aspects that came to light that I didn’t care for.  I didn’t like how pushy and judgmental Eden became as she pursued the investigation. Maybe she was like this before, but I don’t remember. However, I will say she was put in her place by the inspector, and she tried to tamper her attitude subsequently. So, while it was annoying in the start, it seemed to settle down after a while.

Second, I was put off by how the first book left us thinking Vicky and Kirsten had worked things out, but then this one opened with Kirsten being a total b*tch again. This continued for quite a while, and it bothered me – been there, done that. She did make amends about halfway in (+/-) so I really hope we don’t get a repeat in book 3, or I’ll be so tired of it.

Lastly, I applauded the fact that the author put the inspector out of dating potential in the beginning and then focused on Eden’s attraction to Leif. I like their very slow burn attraction as it builds. But then, at the very end of the book, it looks like Eden accepts a date with both Leif and the inspector. This annoyed me.

The mystery itself was well-written. Clues were left here and there, but it really took time to put them all together. While I guessed at the who, it wasn’t until closer to the end than the beginning, and even then, I didn’t have it all right. But once everything is revealed, it all made sense. It’s smart and engaging.

Angela Dawe is amazing. Each voice is distinctive and genuine. She is equally strong with both male and female characters. And if I only heard her males out of context – I would assume she was a man. The accents are also customized to each character. Ms. Dawe also does a lovely job added in the emotional content of the scene with her non-verbal sounds, reactions and cues. The whole book is fabulously brought to life through her performance.

My Ratings:
Story: B/B+
Narration: A+

It’s early September in Glenkillen, Scotland, when American expat (and budding romance novelist) Eden Elliott is recruited by the local inspector to act as a special constable. Fortunately it’s in name only, since not much happens in Glenkillen.

For now Eden has her hands full with other things: preparing for the sheepdog trial on the MacBride farm—a fundraiser for the local hospice—and helping her friend Vicki with her first yarn club skein-of-the-month deliveries. Everything seems to be coming together—until the head of the welcoming committee is found strangled to death with a club member’s yarn.

Now Eden feels compelled to honor her commitment as constable and herd together the clues, figure out which ones are dogs, and which ones will lead to a ruthless killer . . .