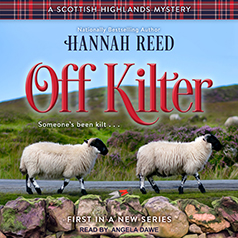 Eden Elliot has had a crappy year. Her husband divorced her and her mom died. So best friend, best-selling romance author, Ami Pederson, sent Eden on a 6-month vacation to a small town in the Scottish Highlands, and won’t take no for an answer. Eden not only needs the relaxation, but she’s under contract to write her own romance novel, which happens to be set in the Highlands.

On the plane, Eden befriends Vicki MacBride who is on her way to the same small town for her father’s funeral and to take over her large inheritance, much to the dismay of her half-siblings. Treated as an outsider, Vicki finds little comfort in her new home, and once she discovers the murdered body of the local sheep shearer, she’s considered a prime suspect. Unfortunately for Eden, she’s caught in the middle of the mess, and won’t leave her new friend out to hang.

Off Kilter is an exciting cozy mystery set in the picturesque town of Glenkillen. Although the murder mystery is serious and Eden faces true danger, the story is light, as a good cozy mystery should be. I like that Eden isn’t really a sleuth, but has an inquisitive mind, and is only trying to help her friend. She isn’t out to prove she’s more knowledgable than the police, and the local law enforcement is top notch.

Even though the murder is the focal point of the plot, the story provides slower moments which are the times we learn more about Eden and her surroundings. She takes time to appreciate the local scenery and befriend the residents, most specifically the hunky stranger who rescues her on the way into town. She and Leif spend a bit of time together, and I hope to see more of the pair in the next title.

One of the reasons I picked up Off Kilter was because of Angela Dawe. While I’ve never listened to a book narrated by her before, I’ve heard a lot of positive things. Since the story is shared from Eden’s point of view, her pleasant voice is used for most of the book, only changing for dialogue. I was very impressed with Ms. Dawe’s work, most especially all of the accents – each a wee bit unique and different. I like the use of the Scot slang, too. Ms. Dawe’s female voices are spot on, with her male voices pretty solid, most are masculine and deeper.

In the end, I very much enjoyed listening to Off Kilter. The mystery was engrossing, leaving me wondering the whys up until the end. The story had a nice pace, only slowing down once and a while for listeners to learn more about Eden. Ms. Dawe’s accents brought the story together perfectly.

After the recent death of her mother and the dissolution of her marriage, thirty-something Eden Elliott is seriously in need of a fresh start. At the urging of her best friend, bestselling author Ami Pederson, Eden decides to embark on an open-ended trip to the picturesque village of Glenkillen in the Scottish Highlands, to do some hands-on research for a book of her own. But almost as soon as Eden arrives in the quaint town, she gets caught up in a very real drama…

The town’s sheep shearer is found murdered—clipped with his own shears—and the locals suspect Vicki MacBride, an outsider whose father’s recent death left her the surprise heir to his lucrative sheep farm. Eden refuses to believe the affable heiress is a murderer, but can she prove that someone is out to frame her new friend before she finds herself on the receiving end of more shear terror?