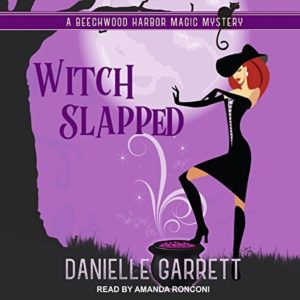 Witch Slapped takes listeners back to the coastal town of Beechwood Harbor and the adventures of resident witch, Holly Boldt. The holidays are approaching and Holly’s shifter boyfriend Adam shares the news that his parents are coming to town. And if that isn’t stressful enough, Holly’s SPA agent moves into the manor, working on a secret investigation. Unfortunately, Holly’s thriving potions business isn’t entirely legal, and she is worried he’ll discover the truth and send her to prison for good. Toss in a cheating spouse, gruesome murder, and a mafia vampire family, and things are pretty much normal for Holly.

I’m really enjoying the cozy mystery with a paranormal twist stories of the Beechwood Harbor Magic Mysteries series. When we last saw Holly, she was finally opening up to Adam and making a home in Beechwood Harbor. However, apparently Holly didn’t really change in the months following the previous book. Once again, she stumbles into trouble while on an investigation with Nick. And while she shares some of what is going on with the out-of-town Adam, she continues to go behind his back and take matters into her own hands. Additionally, being around Nick causes Holly to question her future and where things are heading with Adam. This frustrated me to no end when listening to Witch Slapped. And honestly, at this point, if it becomes a reoccurring theme in each title, I may have to back away. Either put Holly and Adam together and allow their relationship to bloom, or break them up and have Holly move on with life. OR, just drop the romantic entanglements altogether, and focus solely on the engrossing mysteries.

Outside of the romance, I enjoyed the continuing development of camaraderie and friendship between Holly and several of the supporting characters. Here is one place the overall character development is progressing. Additionally, the mystery itself is exciting. I enjoy listening to Holly pull the pieces together or work them over with Nick. I just wish Nick and best friend Cassie could be in the know (about supernaturals).

Although I enjoyed the storyline in Witch Slapped, the conclusion of the mystery went down very quickly and fell a bit flat for me. Holly made big plans on how to bring down the bad guys, but everything just got shoved out of the way once she arrived on scene. I wasn’t satisfied with the ease with which the bad guys were ultimately brought down. But even more disappointing was the lack of emotion from Adam, who made Holly promise she wouldn’t get involved. Why make such a stink about it earlier in the book if after she lied to him, he doesn’t react?

As always, I do enjoy the story as read by Amanda Ronconi. She brings life to the harried Holly. However, I’m really struggling with Ms. Ronconi’s limited range for male voices, which tend to overlap and blur. I can mostly tell the difference between Nick and Adam, but most other male characters are similar. Likewise, many of the paranormal characters sound similar. Yet, I still love how well she captures Holly’s persona.

In the end, Witch Slapped was entertaining, but I had some issues. The mystery was engrossing, but the ending came too easy. The romantic piece of the book was disappointing. Holly needs to get her act together. I get she’s unsure of what she wants out of life, but she’s not good to Adam, and I’m not okay with it. Either put her in a relationship or take her out of one and let her get her act together.

Holly’s got a big problem…

And this time, there’s no dead body involved.

At least, not yet.

Her boyfriend’s parents are coming into town for the Yule Feast and they’re staying at the Beechwood Manor — for an entire week!

With a paranormal meet-the-parents on the horizon, the last thing she needs is to stumble into yet another murder investigation, but when she becomes a key witness, there’s no way of avoiding it. Especially not if vampires are involved and her human partner-in-sleuthing is racing right into their path.

Holly has to stop a ring of power-hungry vampires, charm a pair of uptight shifters, and keep herself out of supernatural prison. Piece of cake, right?