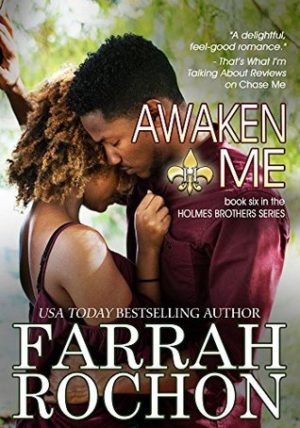 None of the Holmes’ siblings take Reid very seriously, and he’s done nothing to try and change their minds about him. But when he wakes next to yet another beautiful woman who’s name he can’t remember, he realizes it’s time for a life change. And when he meets Holmes Construction newest employee, he realizes Brooklyn is someone worth changing for.

Brooklyn blames herself for the closing of her dad’s company, and now she’s going to work twice as hard for Holmes Construction to help pay for her dad’s medical bills. But even though she’s the best at what she does, her heart belongs to another passion: drawing and writing comics. Luckily she has a gorgeous workplace crush to keep her mind occupied while on the construction site.

Awaken Me is a wonderful slow-burn romance between two people more alike on the inside than anyone would suspect. Brooklyn and Reid are both afraid to take chances for fear of disappointing their families. Where as Reid allows his family to think he’s shallow and doesn’t take life seriously, Brooklyn strives to do her best to show her parents she’s the dependable, hard worker they know her to be. But both want more from life, and they are posed at the precipice of change when they meet one another, which allows them to grow both individually and mutually.

Mutual attraction plays a role in their story. But instead of jumping into bed, both want to take it slow, even when their bodies don’t agree. This is important, because in order for the relationship to have a chance, they need to get to know each other, and both need to take down walls. I love the little moments when each is open and honest, sharing some of the person they are on the inside.

Awaken Me is a solid romance, but it’s the extras that make the book a story; a journey. The overwhelming feelings stirred by the memories of Reid’s deceased mom are touching and heartfelt. I love the family-centric setting, including the fears of letting down loved ones. It’s all relatable.

In the end, I truly enjoyed the slow burn romance of Brooklyn and Reid. They are two peas in a pod: both filled with fears and insecurities. They felt a connection and allowed it to blossom over time, creating a passionate love story.

As the baby of his family, Reid Holmes has happily played the role of the Charming, Irresponsible One. But as his 30th birthday approaches, Reid wonders whether he should be doing more with his life than working as a plumber for Holmes Construction. Now he has the chance to shed his carefree playboy image and go into business for himself, but is leaving his cousin’s construction company a sign of growing up, or the ultimate show of disloyalty? And with the arrival of Holmes Construction’s gorgeous new site coordinator, Reid isn’t sure now is the best time to jump ship.

When her father is forced to close the family’s longtime handyman business, Brooklyn LeBlanc sees her chance to break free of the job she’s been stuck in since age 15 and finally pursue her dream of writing comics. But responsibilities—and her secret role in the demise of her family’s business—forces Brooklyn to again put the career she truly desires on the back burner. At least her new job at Holmes Construction comes with a hot plumber she can spend the day fantasizing about. But what happens when her harmless workplace crush awakens feelings that aren’t so innocent?