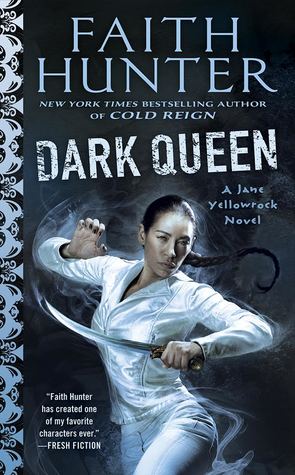 As what was initially intended to be the final Jane Yellowrock title, Dark Queen had a lot of expectations to live up to. And I think it did so very well. This story moves incredibly fast, especially towards the end, making it at once a little difficult to keep up with in places, as well as the most thrilling of these stories to date.

One of my favorite thing about this series is that Jane has never escaped having to deal with the consequences of her actions. She has made a lot of mistakes, and learned from the various outcomes. Even better, she’s still learning. She’s also still imperfect and conflicted, but, finally, she’s found peace with Beast and isn’t alone.

This was a tough read in both good and bad ways for me. Dark Queen is the culmination of all the twists and turns in the previous stories and ends in no-holds-barred combat between Leo and his subjects and his European former master who’s determined to destroy him and take over everything. As such, the author isn’t kind, and too many specifics here would ruin it. In an effort to avoid direct spoilers, I’ll leave additional opinions on that part alone, since long-term readers will likely want to get all the details straight from the narrative themselves.

There were a couple of things about Dark Queen that bothered me, but not enough to diminish my overall enjoyment of the story. Though I’m always left confused by some of the details that are dropped across the Jane Yellowrock tales, the succinct recaps that are provided by Jane digging through her own memory in this case didn’t always help. More critically, I felt that the dangling of hope in certain instances did more harm than good, and wasn’t entirely necessary, but that’s likely a personal quirk, and not something that will affect most other readers. The fact that I still can’t keep track of all the players is actually more of a testament to the author’s skills as a storyteller than a fault, and makes me regret not making a spreadsheet of everything from the moment I started the series.

Dark Queen would have been a good, if bittersweet, ending to the Jane Yellowrock series, but the discovery that there will be at least two more to follow made it even better. There were many questions answered by the end, but others were created, and they are of such import that I think things would have still felt too unfinished as they are. Regardless, Jane has evolved tremendously over the course of these books, and I’m truly relieved that it’s not quite time to say goodbye after all.

Jane Yellowrock used to hunt vampires, but now she must fight–and win–beside them.

As Enforcer to the vampire Master of the City of New Orleans, Jane Yellowrock stakes her reputation and her life on keeping her territory safe. But Leo has been issued a blood challenge by the emperor of the European vampires, who seeks to usurp all of his power and possessions. If Leo loses the match to the death, the city will be forfeit, and the people of New Orleans will suffer the consequences. Jane can’t let that happen.

Preparing for the duel requires all of Jane’s focus, but with so much supernatural power in play, nothing goes according to plan. She has to rely on herself and the very few people she knows she can trust to stand and fight. Only two things are guaranteed: nothing is sacred, and no one is safe.