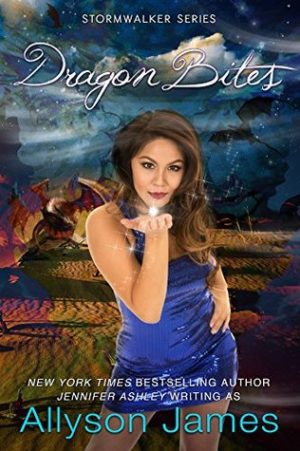 Dragon Bites is the next adventure for Mick and Janet; however the book really belongs to Gabrielle, who comes into her own over the course of the story. Adding to the changes in Dragon Bites, Ms. James alters her writing style to include several first-person-POVs from not just Janet, but Gabrielle, Mick, and Colby. At first I didn’t care for it, but after a while I grew accustomed to the “mind swapping” and enjoyed learning what the other characters (besides Janet) were thinking.

As I mentioned, Janet and Mick take almost a backseat to Gabrielle in Dragon Bites. While they remain major players, the story focuses on Gabrielle’s journey to break out from Janet and Grandmother’s shadows and restrictions, as she learns more about her own powers. The author is able to provide a deeper insight into Gabrielle through her first person POV. We get inside her head and learn her doubts, fears, joys, and desires. Along the way, new characters are introduced, giving Gabrielle the opportunity to prove to Janet, Grandmother, and herself, that she’s not just the crazy girl with the evil goddess mother.

My only issue with the story, if you can call it that, is the length of time in between books. While the author is good about working on this self-published series when she can, and keeping fans up to speed, in the past five years there has only been two books. It’s tough to keep invested in the characters when so much time passes, and I feel like I have to relearn them each time. I’m starting to forget what drew me to the series and why I love it so. Maybe I need a re-read.

In the end, I enjoyed my time spent back in the Stormwalker world, and will continue to follow along on their adventures for now.

Maya and I are just trying to have a girls’ weekend in Vegas. Kick back, take in some shows … Then Gabrielle decides to tag along.

Now there’s a dragon slayer after Mick, gladiatorial games from hell, and a Vegas hotel full of trapped demons. When

Gabrielle and I charge in to assist, we don’t realize we’re awakening an ancient and terrible evil …

This evil is now after Gabrielle and her all-powerful magic, and it’s going to take me, Mick, Colby, and the rest of the dragons to keep my little sister safe.