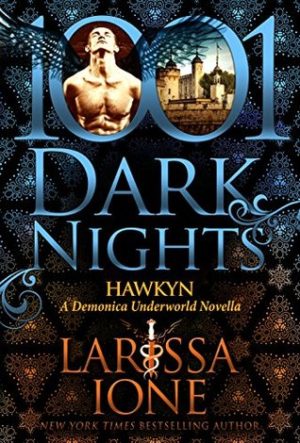 Hawkyn is a special earth-bound angel known as a Memitim, and his job is to protect his Primori: humans, who for whatever reason, are destined to make an impact on all humankind. Hawkyn has lived centuries under the strict heavenly rules, waiting for the day he can ascend and sit on the Memitim Council so he can make changes to their archaic ways. But when he steps in to protect Aurora from his serial killer Primori, Hawkyn begins to stray from the path.

Aurora is a Wytch; the fabled species that is a mix of human witch and incubus. She’s chosen to live a human life, keeping her powers under wraps and not fulfilling her warrior destiny. But when she’s attacked and taken by a mad monster, Aurora’s eyes are open to a world she had only heard about.

Hawkyn is another 1,001 Dark Nights novella set in Ms. Ione’s Demonica world. While the romance is standalone, I feel that previous knowledge of the world would be useful when reading the story due to the large number of characters and types of beings that inhabit the world. For example, there is a significant side-story involving Azagoth, the father of all Memitim, and his mate, Lilliana, which takes up a bit of the book and isn’t resolved by the end.

While the author does a solid job of building the story and conflict around Hawkyn and Aurora, I feel that the romance aspect is lacking. There is much build up around why Aurora is kidnapped, what to do to save her, and how to change the Memitim, which is all interesting and mostly entertaining, but leaves little room for actual romance (and I don’t mean just sex). The pair spends little time really getting to know one another, and there aren’t any romantic overtures until well after the 50% mark of the book.

In the end, Hawkyn was an interesting story, but the romance fell flat for me. There wasn’t much build up or chemistry. Ms. Ione is making a lot of changes in her Demonica World with these novellas, which is cool and all, but the novellas lack the richness of the full-length story. I love the world, but I need more.

As a special class of earthbound guardian angel called Memitim, Hawkyn is charged with protecting those whose lives are woven into the fabric of the future. His success is legendary, so when he’s given a serial killer to watch over, he sees no reason for that to change. But Hawkyn’s own future is jeopardized after he breaks the rules and rescues a beautiful woman from the killer’s clutches, setting off an explosive, demonic game of cat and mouse that pits brother against brother and that won’t end until someone dies.

Aurora Mercer is the half-wytch lone survivor of a psychopath who gets off on the sadistic torture of his victims. A psychopath whose obsessive psyche won’t let him move on until he kills her. Now she’s marked for death, her fate tied to that of a murderer…and to a sexy angel who makes her blood burn with desire…