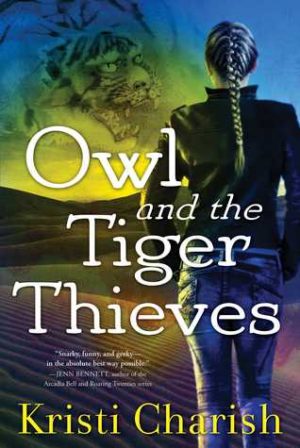 Owl and the Tiger Thieves is the exciting return of Owl after a devastating blow in the previous novel, Owl and the Electric Samurai.  Though left with another cliffhanger, the story continues to grow and intrigue.

Owl has become a lynchpin in a supernatural war.  She did not start out on this path; but a series of bad choices, unfortunate events, and maybe a little of her sarcasm has brought her to this point.  Now Owl is a lot more reckless and drastically more desperate as she works to stop the Electric Samurai before too many innocents are lost.  However, woefully the proud underdog, Owl finds herself teamed up with a previous enemy to try to save the world without sacrificing herself.

This is the fourth book in a fascinating series that is a cross between Lara Croft/Indiana Jones and Buffy the Vampire Slayer. However, Owl has been a complete underdog.  Her expertise is not good luck, but being able to get out of any bad situation with only minor injuries and epic amounts of collateral damage.  There is no way that Owl can continue on this path, and I have been wondering about her lack of self-defense skills.  Apart from the overarching plot of Owl against the Electric Samurai and her thieving for the Japanese Dragon, some much-needed soul-searching occurs in this novel.  I enjoyed her self-reflection and look forward to seeing what happens next for Owl.

Though the ending is a huge one-eighty-degree turn from the start, I am eager to see what happens next.  It goes to show that just because you can save the day, does not mean the victims will be happily grateful.  Due to the ramifications of the end, I am anxious to know where Owl will find herself next and if she will truly survive.

Through no fault of her own, Alix has found herself essential to the fate of the world as we know it. She didn’t mean for this to happen—she was quite happy being merely the notorious antiquities thief, and ex-archeologist, known as Owl.

However, years ago, Owl reluctantly entered the secret world of the supernatural. Her goals: complete one job, escape one bounty on her head, continue her thieving in peace.

Fast forward to today. Now, she has become a key player in a brutal paranormal civil war that is rapidly getting out of hand. The leader of one of these factions—a lethal opponent called the Electric Samurai—grows more powerful by the second. To stop him, Owl sets out to find the long-lost, legendary group known as the Tiger Thieves.

But will it be too little too late? One thing Owl misses about “normal” archaeology: there are few emergencies with thousand-year-old relics.