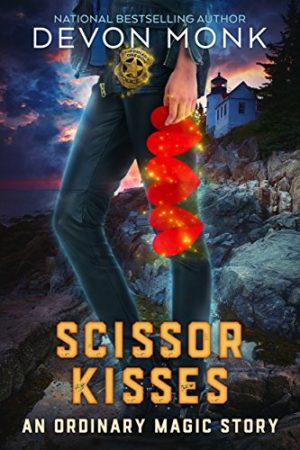 Scissor Kisses is the third novella in the Ordinary Magic series.  This long awaited novella featuring Myra was only a taste of what Gikany and Una hopes is coming in the next novel.  Though it contains the wit we have come to love, the substance was light in progressing some overarching plot lines.

Unfortunately, after two novellas where we see the other two Reed sisters in the midst of an HEA or at the beginning of one, we were expecting something to come out of the strange romance between Myra and the demon, Bathen. However, though we have an interesting stalker situation (which was easy to figure out), nothing truly happens.  Myra learns more about Bathen and admits (finally) about the attraction to him.  However, Delaney’s soul is still in Bathen’s possession and seems like it will remain that way.  Though Myra may have a possible way to free Delaney’s soul, there appears to be fine print and no one is clarifying it.  Myra being the thorough sister won’t try to free Delaney’s soul until she knows what the consequences and ramifications are.

If Gikany and Una could describe this novella, it is really a prequel – a set up for the next full length novel that we suspect will feature Myra working on freeing Delaney’s soul.  We aren’t sure what possible HEA can be found between Myra and a demon (prince or not).  But the romantic tension between them is palatable.  But though the novel doesn’t truly move major plot points forward, it is a fun story where we get Myra’s perspective.  For fans of the series, I think it is a delightful appetizer to the next full novel due out soon.

This Valentine’s Day there’s more than hearts at risk…

Police officer Myra Reed prefers her life orderly, predictable, and logical. Unfortunately, she lives in the little beach town of Ordinary, Oregon where gods vacation and monsters cause all sorts of trouble.

Her most recent headache is a sexy demon named Bathin, who has tricked his way into both living in Ordinary, and owning her sister’s soul. She wants him out of Ordinary. He wants…her.

Myra will get her sister’s soul back no matter the price. But first she must deal with a stalker, a crossroads deal, and a dangerous spell that could fix everything, or reveal the one secret she’s buried deep: she might be falling in love with a demon.