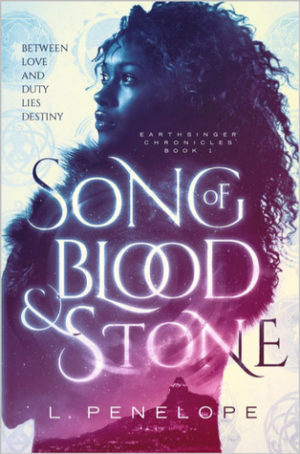 In the days of old, a Lord and Lady arrived from a distant, dying world. Upon their arrival, they used their Earthsong magic to bring life to the withered land. The Lord and Lady and their nine children lived among the native cave dwellers and eventually, the children mated with the original inhabitants. Their offspring were either Earthsingers, or Silents (those without magic). Many centuries later, the two lands are at constant war, with only a magical wall helping keep the peace.

Jasminda lives in Elsira and is the daughter of an Elsiran (Silent) mother and a refugee Lagrmarian father, who was a POW of the Fifth Breach. She shares her father’s dark skin and magical abilities, making her an outcast in her mother’s homeland. On her own after losing her entire family, Jasminda is being forced off her land by her estranged grandfather.

As a member of the Elsiran Army, Jack is on a return trip from his spy mission into Lagrmari when his pursuers wound him. Jasminda saves the stranger with her Earthsong, and the pair works together to escape their rough Lagrmari captors. Jack knows he must make it back to the capital to share the horrible plans of the True Father and his designs to take down the Mantle, starting another Breach War.

Song of Blood and Stone shares with readers a unique and interesting new world. I found myself engrossed in the intricacies of the mythology, which is grounded in a solid, familiar story, yet wholly different from what I’ve read before. Like many first books in a series, Song of Blood and Stone spends much of the book building its world and solidifying the background and lore. The flow is smooth, although the first half of the book is much slower due to the development of the world and characters.

From the start, I found myself fascinated with Jasminda. She’s a stranger of her people (the Lagrmari), having grown up in Elsira. Her father rarely talked about his homeland, and didn’t teach Jasminda about her Earthsong or the customs of the Earthsingers. Unfortunately, at times Jasminda’s naivety and isolation made her seem too young and out of sync with her physical self. While it worked for her as she learned more of her people, I felt it worked against her in the romantic aspect of the story.

Jasminda is also not accepted by the fair-skinned Elsirans who are fearful of her magic and see her as a threat to their safety and way of life. The story is a commentary on racial issues without preaching. The author gives insight into the problems through Jasminda’s thoughts, feelings, and actions.

Jack is an interesting character, one with hidden truths, but full of optimism and idealism. He carries his values in his heart and doesn’t let politics sway his compassion and desire to fix the world. But he is also in a position that requires political maneuvering, which adds conflict to the romance and plotline. He’s a great fit for Jasminda because he sees past her skin color and magical abilities.

I did feel like Jack and Jasminda’s relationship was rushed, with their declarations of love a bit too much “instalove” for me. Yet some of the best romances are borne from dire situations, and Jasminda and Jack were certainly tossed together and in danger. Additionally, Jasminda came across so young, it seemed like she was just wide-eyed and experiencing her first crush rather than true love. We’ll see how it develops in book two.

In the end, I enjoyed Song of Blood and Stone. I loved the mix of magic/fantasy and the realism of hatred and bigotry. The mythology of the Earthsingers was fascinating. While I felt the beginning half moved a bit slow as the author set the word, the storyline picked up as the action intensified. I look forward to reading the next book as we hopefully see the pair work through the years of mistrust and hatred to help mend the land.

Orphaned and alone, Jasminda lives in a land where cold whispers of invasion and war linger on the wind. Jasminda herself is an outcast in her homeland of Elsira, where her gift of Earthsong is feared. When ruthless soldiers seek refuge in her isolated cabin, they bring with them a captive–an injured spy who threatens to steal her heart.

Jack’s mission behind enemy lines to prove that the Mantle between Elsira and Lagamiri is about to fall nearly cost him his life, but he is saved by the healing Song of a mysterious young woman. Now he must do whatever it takes to save Elsira and it’s people from the True Father and he needs Jasminda’s Earthsong to do it. They escape their ruthless captors and together they embark on a perilous journey to save Elsira and to uncover the secrets of The Queen Who Sleeps.

Thrust into a hostile society, Jasminda and Jack must rely on one another even as secrets jeopardize their bond. As an ancient evil gains power, Jasminda races to unlock a mystery that promises salvation.

The fates of two nations hang in the balance as Jasminda and Jack must choose between love and duty to fulfill their destinies and end the war.