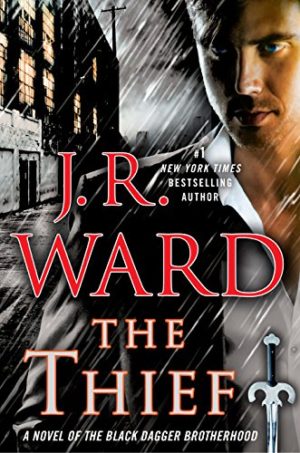 The Thief is the sixteenth novel in the Black Dagger Brotherhood (BDB) series.  Though some overarching plot lines are resolved and/or made more convoluted, it was as gripping and intriguing as I’ve come to expect.

Suffice to say, The Thief resolves the romantic plot lines between Assail (drug/arms dealing vampire) and Marisol (aka Sola the human thief).  However the new threat that Throe presents is only intensified in this novel as we learn more about his plot as well as the origin of power.  As always with this series, there are multiple plot lines running through with only a few being resolved.  Yet die-hard fans will be happy to know that some Ward teasers and “spoilers” finally come to fruition, for example; Murhder, the current state of the Scribe Virgin, Saxton’s HEA, the nature of Boo the cat, and a few other tidbits.

For those (strangely) unaware, Saxton’s HEA took place in the spin-off series, Black Dagger Legacy (BDL).  Though not necessary, his mate’s background is important to understand why he makes a worthy escort to Saxton when conducting the King’s business. I feel, now after The Thief and Blood these series need to be read in order to fully appreciate the complete world.  Which would make The Thief technically book number nineteen.  Though we do not see BDL characters in the BDB novels, the reverse is true.  In fact, BBD characters are prominent in the BDL novels, in fact one BDB mated pair tend to parallel the BDL main characters.

Unlike in all of the previous BDB novels, the question of Sola’s mortality is not resolved.  Unlike for Mary, Jane and even Manny, Sola’s mortality (along with her grandmother’s) is not addressed.  Assail only believes that since a miracle occurred for the other brothers, he may well be able to have one for his family.  Hence, I wonder what may transpire in a future novel in either of the “series”.  But with the appearance of Murhder and the issue of resolving the inheritance, this tangled plot strand is finally being woven into the story.

There are numerous other plot strands that seemed to just be touched on in The Thief.  But I am sure that Ward is only giving us the teasing taste of what is in store.  These books are truly starting to have the feel of a chess board.  Though a plot line seems unrelated or even out of place, when I look back later, Ward was laying the groundwork for something big later.  I look forward to seeing what lies next for these beloved vamps and their world.

Having allied themselves with the Band of Bastards, the Brotherhood is committed now more than ever to eradicating the Lessening Society. Recovering from their most recent battle against the last of the lessers, the Brotherhood comes to realize that the fight against their enemies is far from over.

Throe, Xcor’s former second in command, is using an ancient tome to summon a new army engineered by a force more dangerous and evil than the Omega.

And now the brothers of the Black Dagger Brotherhood will be tested both at home and on the battlefield.