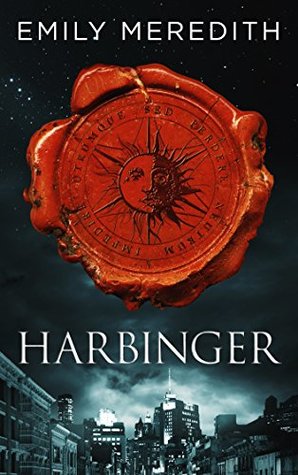 Aamon narrowed his eyes on Annabel as she let out a deep sigh and stared at the paper still threaded through the typewriter. She sat cross-legged in front of it, absently chewing on her bottom lip as her gaze bore a hole through the words.

She was hopeless. Beyond hopeless, in fact. She was a liability.

That a**hole had left over twenty minutes ago. Twenty minutes and she still had yet to get up, walk across the room, and lock the door behind him. Instead, she sat there in her own world, examining every corner of that goddamn piece of paper while anyone could just waltz in.

Had she completely forgotten that she was followed home only a few nights before? Or that the Katechon were keeping tabs on her? Sh*t, they were probably just one of dozens of groups after her at this very moment. And then there were always the one-off nutjobs who wanted to take the fate of the world into their own hands; she only needed one of them on her trail for her to wind up dead.

And here she sat, with the f*cking door unlocked. He paced in front of her. How the hell was he supposed to watch over her when she seemed hell-bent on putting her life in jeopardy every five minutes?

Easily. Because you’re not watching over her.

He stopped as the thought landed squarely in his mind and stayed there, seeping into every corner. It was the truth, after all. He was her tormentor. Her curse. If anything, he should have been reveling in the peril, finding satisfaction in her complete lack of common sense. Instead, the anxiety grew ever more present, as did his watchful eye. A line had been crossed.

He stared at the front door and concentrated. It suddenly swung open then slammed shut, rattling the picture frames on the walls. The sound echoed through the house and reverberated in the living room. He turned and saw her eyes, wide and alert, staring at the door. She hadn’t moved, but every muscle in her body was now tense. Good.

After a moment she rose, never taking her eyes off the door as she approached it. Her hand hovered above the deadbolt, hesitating. As she did he closed his eyes again. Before her fingers had the chance to touch the cold metal, Lucius’s bedroom door upstairs slammed shut. Then the spare room. Then the library. The study. The kitchen. The back door.

Her eyes were wild as she spun around, desperately searching the shadows as the sound of slamming doors filled the house then fell silent. He tried to smile, tried to find the satisfaction he told himself would come. But as she stepped into the foyer, standing tall with her fists clenched, he could only see what others would overlook. The tears forming in the corners of her eyes. The slight tremble of her shoulders as she used every bit of her strength to keep them squared. How small she looked. How small and vulnerable and f*cking beautiful.

Frustration and anger ripped through him and he roared, commanding every door in the house to open and slam shut, over and over again. The cacophony was deafening and echoed against the cold marble floor, fading in the high expanse above them. Annabel’s hands flew to her ears, meager protection as she screamed.

“WHAT THE HELL DO YOU WANT?” she cried, her voice raw and desperate. He should have gotten satisfaction from this. She was terrified and angry, every muscle in her small body rigid in terror. But there was nothing. He felt hollow. He let the doors fall silent then, and stood across the foyer from her.

She couldn’t see him, of course. She never would. But right at that moment, as she stared straight ahead, her gaze fell directly in line with his.

“What do you want?” she repeated, tears pooling in her eyes.

He stared back. She was beautiful, even now as fear consumed her. Her hair, untamed and unwashed, fell around her face to frame her wild, tear-soaked eyes and squared jaw. And those eyes, which seemed to be trained on him, tore down the last of his defenses. His shoulders slumped as he gave in to it, the last bit of fight and anger fading as he stared back.

And an ancient race hunted for centuries.

Annabel Grant always knew she was crazy. The unrelenting déjà vu that’s plagued her since childhood? Proof that she’s cursed with the same insanity that killed her mother, surely. So when her long-lost uncle kills himself, she chalks it up to her family’s genetic legacy. That is, until she uncovers the clues he left behind…

Aamon despises humanity. He’s spent eternity tormenting them, and now Annabel’s curiosity puts him directly in her path. But as the clues begin to hint at a dark secret in her family tree, Aamon soon realizes they could both be pawns in a deadly game between good and evil…

Side-by-side but worlds apart, Annabel and Aamon must work together to discover the truth hidden in her ancient lineage before the forces pursuing them get there first. But their search has dangerous consequences. And as their passion for one another deepens, so does the realization that one’s survival is inextricably linked to the other’s downfall.