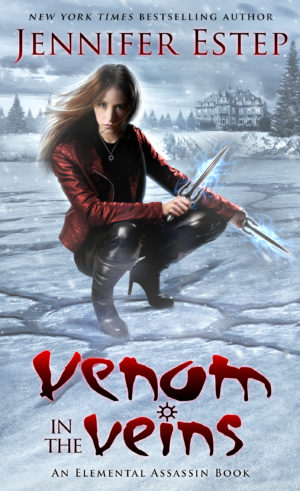 “Tonight is going to be awesome.”

I looked over at Finnegan Lane, my foster brother. “Really? Why is that?”

He grinned. “Because we’re eating at the most expensive restaurant in Ashland, and I’m not paying for it.”

I rolled my eyes. “Only you would judge the quality of a meal by how much it impacts your wallet.”

Finn’s grin widened. “What can I say? I’m a total food connoisseur that way.”

In keeping with his so-called connoisseur status, he grabbed a roll out of the bread basket in the center of a table, slathered it with honey butter, and shoved the whole thing into his mouth. Finn sighed with happiness as he chewed and swallowed. Then he grabbed another roll and slathered even more butter onto it than he had on the first one. He was probably wishing the butter was melted so he could dunk his entire roll into it.

Being a fine Southern gentleman, Finnegan Lane considered butter a dipping sauce, rather than a mere garnish, and he felt the exact same way about ranch dressing, honey mustard, sour cream, and even mayonnaise on occasion. And I agreed with his assessment one hundred percent, being a fine Southern lady myself.

We were dining at Underwood’s, the city’s most expensive and highfalutin restaurant, the sort of fancy, froufrou place that frowned on treating butter and other common condiments as dipping sauces. Their loss.

Pristine white linens covered our table, along with gleaming crystal wineglasses, polished silverware, and the sterling-silver bread basket that Finn was rapidly emptying. Everything from the linens to the glasses to the butter knives was either patterned, etched, or stamped with a small fork, the restaurant’s rune and a symbol for all the good food it served.

Our table was situated in the back corner, right next to the floor-to-ceiling windows that offered sweeping views of the Ashland skyline. Down below, the lights burned bright and steady in the surrounding shops and restaurants, inviting people to step inside and get out of the cold, snowy evening. The combined glow of the lights stretched across the Aneirin River, making the water shimmer like a silver ribbon as it curled through the downtown area. In the distance, I could just make out the white gleam of the Delta Queen riverboat casino, anchored at its usual dock.

I admired the view for another moment before staring back out at the restaurant. It was just after six o’clock, and Underwood’s was filling up for the evening. Some diners were already cutting into their grilled steaks and charred chickens, but most folks were clustered around the bar, squeezing in one last business meeting over drinks before either heading home for the day or getting their party started for the night.

Finn and I were here on business too, waiting for Stuart Mosley, Finn’s boss and the president of First Trust bank.

I checked my watch. “What did you say Mosley was doing? It’s not like him to be even a few minutes late.”

Finn finished chewing and swallowing his second roll. “He’s overseeing a few final details for the charity auction tomorrow night. You know, the one with all of Mab’s stuff.” He paused. “At least, the stuff that wasn’t destroyed during the Briartop robbery last summer.”

Mab Monroe had been the Fire elemental who’d run the Ashland underworld for years before I killed her for murdering my family. After her death, Mab’s massive art collection had gone to the Briartop museum to be displayed, but a group of giant robbers had crashed the exhibit’s opening-night gala, destroying much of the art. Of course, I’d stopped the robbers, but not before they’d killed and injured several innocent people during their attempted heist.

What was left of the art had been put into storage, and various legal wranglings had gone on for the last several months, until the Briartop board of directors had finally decided to auction off everything for charity. The money raised would go to the robbery victims and their families, as well as helping to pay for repairs and new security measures at Briartop. Something that was desperately needed, since the museum kept getting knocked over like it was a common convenience store rather than a prestigious art institution.

“Mosley’s on the museum board, right?” I asked.

Finn reached for a third roll. “Yep. The charity auction was his idea, and he’s the one who’s overseeing everything, including cataloging and storing the art and arranging for the rest of Mab’s things to be safeguarded until the auction.”

All the talk of the Fire elemental made my hands start itching and burning, and I stared down at the marks branded into my palms, each one a small circle surrounded by eight thin rays. Spider runes, the symbol for patience.

Even now, all these years later, every time I looked at the scars, I still half expected the runes to be as red, raw, and blistered as the night Mab had burned them into my skin with her cruel magic. The marks might have faded to their current pale silver, but my memories were as hot and fresh as the rolls Finn kept gobbling down.

My hands reflexively curled into fists, hiding the scars, but I forced them open again. A silverstone ring stamped with my spider rune glinted on my right index finger, and I twisted it around several times. Then I raised my hand, grabbed the spider rune pendant hanging around my neck, and ran it back and forth on its silverstone chain. Focusing on the solid, tangible feel of the other runes—my spider runes now—helped me to ignore the lingering phantom pain in my palms and all the horrible memories that came along with it.

He reached for the fourth and final roll in the basket, but I smacked his hand away.

“Leave one for Mosley. This dinner was his idea, after all. And as you so eloquently pointed out, you’re not the one paying for it. He is. The man should actually get some food for his money.”

Finn’s green eyes narrowed, and he rubbed his thumb over the hilt of his butter knife like he was thinking about brandishing it at me.

I grinned. “You really want to get into a knife fight with me? Go ahead, sugar. You just go right ahead.”

His gaze dropped to the long sleeves of my black pantsuit jacket and the two knives that he knew I had tucked away there—silverstone blades that were a lot stronger and sharper than the pitiful little one he was holding.

He sighed and put down his knife. “You’re no fun.”

My grin widened. “So you keep telling me.”

Blood might be thicker than water, but venom is stronger than just about anything …

It was supposed to be a nice, quiet, simple dinner with friends—but nothing is ever nice, quiet, or simple when you’re Gin Blanco, the Spider, notorious assassin and current queen of the Ashland underworld.

This time around, someone seems to be targeting Stuart Mosley, the president of First Trust bank. Lots of people have grudges against Mosley, but the more I investigate, the more Mosley’s problems seem to be connected to some of my own, especially when it comes to the Circle, the evil, shadowy group that is secretly responsible for much of the crime and corruption in Ashland.

But when another blast from my dark and deadly past as the Spider comes to light, I wonder if I’ll be able to survive this dangerous new enemy, who has a burning thirst for revenge that will only be satisfied with one thing: my death.

Jennifer writes the Elemental Assassin urban fantasy series. Venom in Her Veins, book #17, will be released on June 12.

Jennifer is also the author of the Crown of Shards, Mythos Academy, Bigtime, and Black Blade fantasy series.