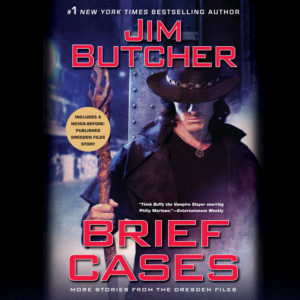 Brief Cases is a delightful anthology of novellas and shorts all set in the Dresden world. While one could listen/read without having read Dresden previously, I think the stories are more meaningful and entertaining for the fans of the series. The tales take place over a wide-ranging time period, from before Harry’s birth, to events that take place shortly after the conclusion of Skin Game, the most recent full-length story. If you are not up-to-date with your Dresden reading, there are huge spoilers in some of the stories.

Generally, the narration is high caliber. Most of the stories, all those told from Dresden’s point-of-view, are performed by James Marsters, and he is the absolute best! It’s been over a year since I last listened to new Dresden titles, and hearing his voice felt like coming home. He is truly amazing, able to portray deep emotion and those inexplicable non-verbal cues that make the difference between reading and performing the work. Most of the other narrators fit their personas and did a solid job. I’ve included comments about each narrator with the story they perform.

A FISTFUL OF WARLOCKS (from Straight Outta Tombstone, edited by David Boon), read by Cassandra Campbell Luccio takes on necromancers in the Wild West. Set long before the events of the series.

Not my favorite story, but gives backstory on a dangerous nemesis from present day. I liked that part of the story, but wasn’t a fan of the tie-in with Wyatt Earp. The narrator had a lovely Italian accent, fitting of Luccio. But I didn’t really care for her other character voices, and the speed was difficult for me to get just right. Even though it was fast for Luccio, I ended up pushing to 1.5x speed because Earp’s drawl was painfully slow. I didn’t care for his voice… a bit grating. B-/C+ (Story/Narration)

B IS FOR BIGFOOT (from Under My Hat: Tales from the Cauldron, edited by Jonathan Strahan), read by James Marsters Takes place between Turn Coat and Changes.

Mr. Butcher adds Bigfoot to his expansive world. Harry is hired by a “forest person” to look in on his half-human son, who seems to be experiencing a supernatural issue at school. Hearing Marsters’ voice was like coming home. My heart lit up, just hearing Harry again. It’s been too long. I missed this. The story was wonderful and typical Harry. B+/A

AAAA WIZARDRY (from the Dresden Files RPG), read by James Marsters Harry teaches a group of young Wardens his procedure for dealing with supernatural nasties.

Harry teaching young wardens with a personal story. It’s pretty good, but six minutes in, the whole direction of the story changed. There was no transition, and it was very confusing. I had to skim forward and re-listen to determine it was the same story. Marsters narration is spot on.  B/A

I WAS A TEENAGE BIGFOOT (from Blood Lite 3: Aftertaste, edited by Kevin J. Anderson), read by James Marsters Takes place circa Dead Beat.

We find Harry’s Bigfoot friend in need of help again. I love how this is tied directly to the second short in the anthology. And although it’s serious, the reason behind what was happening is hilarious!! So awesome!  A/A

I read this one in the Urban Enemies anthology. (my review: http://twimom227.com/2017/08/review-urban-enemies-anthology.html) The author, Jim Butcher, narrates this one, and does a decent job. He knows his characters and brings them to life, but I’m used to (and love) Marsters. B+/B

This is the third story in the “Bigfoot trilogy,” each connected. The story shares some of the harder parts of being Harry. The love story between Bigfoot Irwin and his lady is heart-wrenching. My only issue is that I feel Butcher neglected one of his own rules for his world/characters, and it bugged me. Yet, I enjoyed the story and the closure we got for Irwin. A-/A

I love getting to know more about Molly from her own POV; to hear that she’s not the insane lady she’s made out to be in Ghost Story, and to know how hard it is for her without Dresden. I like the narrator selected for Molly. It portrays her youth perfectly. But when I hear Leah, Butters, and Dresden himself… the voices are off because I’m so used to Marsters. A-/B+

COLD CASE (from Shadowed Souls, edited by Jim Butcher and Kerrie Hughes), read by Julia Whelan In Molly’s first job in her new role, she teams up with Ramirez to take on a Lovecraft-esque cult. Takes place shortly after Cold Days.

Same narrator, who continues to do a great job with Molly’s character. This is a moving story: one which shows the highs and lows of Molly’s new life as the Winter Lady. One in which she learns two very difficult lessons. It tore me up a little bit. A-/B+

Another Dresden story. Yea! It’s an excellent day-in-the-life story, but as with Dresden, everything isn’t as it appears. A-/A

I love the voice for Butters! I had to lower the playback speed to 1.25x, however. All the character voices are good, but Harry isn’t Harry. I like Butters a lot and this story was great; seeing him come into his own as a Knight. A/B+

ZOO DAY (original), read by James Marsters An exclusive novellette from the perspective of Maggie and Mouse. Set after Skin Game.

This is a wonderful story… day in the life… of a trip to the zoo for Harry, Maggie, and Mouse the dog. The story is first shared from Dresden’s POV, followed by Maggie and then Mouse. Marsters does a great job. The story is touching for those who have followed Dresden and the fears he has over raising Maggie and being in her life. We learn about a dark Fu dog, Mouse’s brother, who works for an entity that wants Maggie.  A-/A

Overall, Brief Cases is a wonderful anthology for Dresden fans, but it’s still not as good as a new book, for which we’re are patiently waiting.

The world of Harry Dresden, Chicago’s only professional wizard, is rife with intrigue–and creatures of all supernatural stripes. And you’ll make their intimate acquaintance as Harry delves into the dark side of truth, justice, and the American way in this must-have short story collection.

From the Wild West to the bleachers at Wrigley Field, humans, zombies, incubi, and even fey royalty appear, ready to blur the line between friend and foe. In the never-before-published “Zoo Day,” Harry treads new ground as a dad, while fan-favorite characters Molly Carpenter, his onetime apprentice, White Council Warden Anastasia Luccio, and even Bigfoot stalk through the pages of more classic tales.

With twelve stories in all, Brief Cases offers both longtime fans and first-time readers tantalizing glimpses into Harry’s funny, gritty, and unforgettable realm, whetting their appetites for more to come from the wizard with a heart of gold.