Audiobook Review: Death in a Stately Home by Sara Rosett 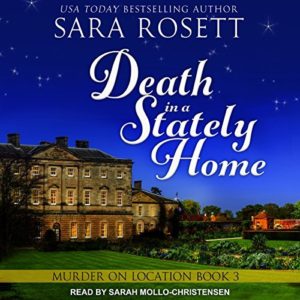 Death in a Stately Home continues the story of Kate, the location scout turned amateur detective.  I enjoyed the latest murder mystery that Kate not only finds herself on location for, but the main suspect.

Part of what makes this series compelling is the beautiful locations that the story takes place.  Kate is still in England, working as a location scout as well as exploring the romantic connection with Alex.  Much to her chagrin, she is still working for the persnickety director/producer of the Jane Austen biography.  On her weekend off when Kate should be getting to know Alex’s younger sister while she is visiting for a break, Kate is coerced into working a Regency-themed English get-a-way.  Her job is to research the event to see if parts of it can be included in the film.  Unbeknownst to the producer, the Lady of the house, Beatrice, wants Kate at the weekend event to keep an eye out for a sabotaging staff member who is trying to sully the family name and estate.  Beatrice and Kate are friends, and Beatrice knows how astute and observant Kate is.  While watching and enjoying the event, Kate stumbles across another murder.  Unfortunately, for Kate, she is the prime suspect and time may be running out to figure out the culprit.

I enjoy the stoicism of Kate and her logical mind.  Alex is eager for Kate and Grace (Alex’s younger sister) to meet.  However, Alex is clueless about how awkward and anxious Grace might be feeling about meeting Alex’s girlfriend – someone who has the potential to drive a wedge between her and her brother.  Kate tries patiently to not step on Grace’s toes and allow Alex and Grace time together without her intruding.  The opportunity to work allows Kate the opportunity to bow-out without hurting Alex’s feelings.  However, Kate’s suspect status seems to be the much needed ice-breaker between her and Grace.  Now if Kate can only keep Grace from being bitten by the “armchair-detecting” bug, things will be perfect.

Ms. Mollo-Christensen expertly captures Kate’s personality as well as her keen intelligence.  The varied and differed accents of the various characters is astounding, and I enjoy listening to the series immensely.  The narration perfectly captures the feel and conveys the vividness of the story.

Though the murderer and saboteur was fairly easy to figure out along with the how, it was the why that was more intriguing for both.  There were plenty of red herrings along the way, adding interest and depth to the story.  While Kate runs around trying to figure out not one but two mysteries, it was fun watching Grace warm up to Kate (and vice versa).  The excellent narration continues to enhance my enjoyment of following Kate on these mysteries.  I thoroughly enjoyed Murder in a Stately Home, the third novel in the Murder on Location series and eagerly look forward to listening to the next.  If you enjoy stunning locations, a bit of Austen, and charming characters, you should pick up this series.

Kate Sharp loves the perks of her location scout profession. When she fills in for a researcher at a Regency-themed English house party, she’s looking forward to indulging in the posh atmosphere of tea on the lawn and elegant candlelight dinners, but when a guest is murdered in a locked room, Kate becomes the prime suspect.

As she turns her attention to the guests, the staff, and the owners, Kate must unlock the mystery and uncover the murderer before she’s arrested for a crime she didn’t commit.