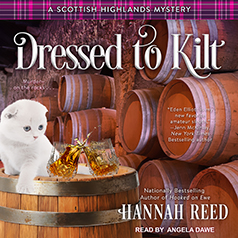 Winter is settling into the Scottish Highlands, and Eden’s time in Glenkillen is coming to a close, which has put her into a bit of a melancholy state. But another mystery begins when Leith and Eden compare invitations to an exclusive private whiskey tasting; each invitation saying it came from the other. Eden immediately turns on her investigative hat, discovering the owner of the distillery was a close friend of Eden’s paternal grandfather. Knowing Eden doesn’t care much for the Elliot side of the family, Bridie contrived a reason for Eden to visit her, but she also reveals she’s the subject of an anonymous threat. And when a dead body shows up in a vat of whiskey, it’s time for Eden and Inspector Jameson to discover the truths hidden deep within the local families.

Knowing that this is Eden’s last adventure in Glenkillen, I went into Dressed to Kilt feeling a bit melancholy myself. Eden spends much of her time reflecting on the friends and life she’s made for herself and how she’s changed over the past five-and-a-half months, as well as where her life back home is heading. Luckily a good mystery, involving the unfortunate death of a local, keeps Eden occupied.

The mystery this time around was just as exciting as in the previous two books. It was clear from the beginning that more was going on than the death of a local servant. I did make a few correct guesses as to some of the background behind the whys, but was off-base on other aspects. I love that I couldn’t figure it all out. The death leads Eden to discovering more about her estranged father and his family, something Eden has been avoiding since she was a young girl. The results are cathartic, even if Eden is unwilling to admit that she needed to go through it.

I did have a couple negatives with Dressed to Kilt: Eden is shut out of the case midway through the story. Her hurt is compounded when she discovers her friends (both home and in Glenkillen) hiding truths and manipulating her to discover more about her father’s family. I didn’t like the disconnect Eden had with her friends – especially as this is the final book; I wanted them to work cohesively and enjoy their time together. Additionally, the whole romantic piece was a let down. The will-they-won’t-they was exciting, but Eden’s wishy-washy attitude over both the Inspector and Leith fell flat for me.

Once again, I was absolutely blown away by Angela Dawe’s performance. She comes across as a cast of dozens. Her voices are so genuine. She pulls off sexy Scottish male, the nosey, annoying American, an elderly Scottish woman, etc. It’s all so vivid and enhances the story. I can pick up the audiobook at any point and know exactly who is speaking as if I was watching a show and seeing the characters on TV.

In the end, I really wish the Scottish Highland Mysteries was more than a trilogy. I want to know what becomes of Eden Elliot and the fall out from the discoveries she uncovered over the course of Dressed to Kilt. But overall, this is a wonderful series, with exciting stories, that are doled out at a pace that is as enjoyable as sitting by the hearth and enjoying a cuppa. The detailed descriptions of scenery, culinary treats, town folks, etc. bring the town of Glenkillen to life, and following Eden as she explores and learns is engrossing.

Winter is leaving the residents of Glenkillen snowbound, but Eden isn’t about to let the weather dampen her spirits. With only a little time left in Scotland, she’s determined to make the most of it—starting with attending a fancy whisky tasting with local looker Leith Cameron. But her classy date turns into a major party foul after a woman is found drowned in one of the vats of alcohol.

Eden immediately steps in as a Special Constable to help solve the case, but her investigation turns sour when she realizes that the killer could be somehow connected to her own Scottish heritage. Now, in order to find the proof she needs to put the murderer behind bars, she’ll have to take a shot at unearthing her family’s past—before she herself winds up buried…