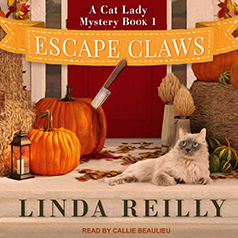 Having recently enjoyed a few “cozy mysteries” on audio, as read by some of my favorite narrators, I thought I’d give an unknown a try. This is how I ended up listening Escape Claws, the first title in the Cat Lady Mysteries. While the premise was interesting and the mystery quite good, the overall presentation of the book didn’t work for me.

Lara is a twenty-something artist living above a bakery shop in Boston. For various, never really specified reasons, she never went back to visit her beloved aunt after Lara and her parents left their small New Hampshire town for the bright lights of Massachusetts. Having recently reconnected with her BFF from childhood (Lara moved when she was six), she finds out that her aunt is struggling with her health, taking care of her numerous cats, and is being harassed by a local businessman. This prompts Lara to head back to her roots. However, shortly after she arrives, said businessman is found murdered on her aunt’s property, keeping Lara in place until everything is cleared up.

The mystery of who killed Theo Barnes is exciting, holding my interest until the end, despite my issues with the book. I also enjoyed watching Lara reconnect with her aunt. While I’m a bit baffled why her family never visited after they moved (NH is not that far from greater Boston), I excepted that there were probably some unexplained family drama we aren’t privy to. Lara internalizes her guilt over abandoning her favorite aunt, which allows her to contemplate where she’s heading in her life, giving her character some depth.

The narration by Ms. Beaulieu is decent; solid at times, but confusing at others. There are times when characters’ voices sounded similar, making it difficult to distinguish between them. Also, there were two cats with very similar sounding names, and I was confused for chapters, thinking it was just one cat. (Cats play a critical role in the book.) Finally, some of the voices she uses for the more annoying characters, were grating.

In the end, I enjoyed the mystery and the connections between Lara and her aunt. I liked meeting the different town’s folk while trying to figure out whodunit. The town is picturesque but the residents are almost out-of-time. If you enjoy quaint, small town cozy mysteries and cats, you may enjoy Escape Claws. It just wasn’t my cup of tea!

For the first time in sixteen years, Lara Caphart has returned to her hometown of Whisker Jog, New Hampshire. She wants to reconnect with her estranged Aunt Fran, who’s having some difficulty looking after herself—and her eleven cats. Taking care of a clowder of kitties is easy, but keeping Fran from being harassed by local bully Theo Barnes is hard. The wealthy builder has his sights set on Fran’s property, and is determined to make her an offer she doesn’t dare refuse.

Then Lara spots a blue-eyed ragdoll cat that she swears is the reincarnation of her beloved Blue, her childhood pet. Pursuing the feline to the edge of Fran’s yard, she stumbles upon the body of Theo Barnes, clearly a victim of foul play. To get her and Fran off the suspect list, Lara finds herself following the cat’s clues in search of a killer. Is Blue’s ghost really trying to help her solve a murder, or has Lara inhaled too much catnip?