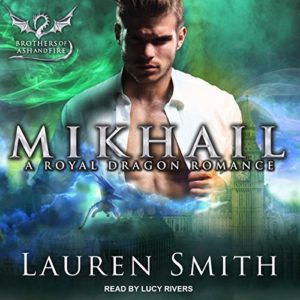 After reading the first book in the series, Grigori, I was intrigued to find the second book available via audio.  Glad I picked it up; I felt that the novel was more enjoyable in this format.

Mikhail begins with the betrayal he endures from Queen Elizabeth.  Because of this betrayal, Mikhail is exiled from his family, unable to return unless he fulfills his duty and brings the treasure home.  Fast forward 500 years (give or take a few decades), Mikhail sees that the jewels have been discovered.  Because of the way they were found, the complete treasure collection will be auctioned by a private auction house in London after being authenticated and documented by two gemologists, one of which catches Mikhail’s eye as well as his dragon’s.

Piper was a bit of a stereotype at first.  She is the curvy girl, shy of her body with a somewhat negative body image, and is a 30 year-old virgin.  Her drive to achieve her career goals has truly derailed any sort of gain in her personal goals.  What keeps this from being annoying or rote is the contrast of Mikhail and that Piper isn’t always negative.  She has a spine and isn’t always afraid to use it.  In fact, there are several stereotypical or clichéd plot points/moments that woven with everything actually makes the novel a bit lighthearted and fun.  I wasn’t sure at first, but by the end I was convinced.

Being able to hear Mikhail’s voice with the full Russian accent truly adds that additional dimension to the story.  Ms. Rivers’s accents was so flawless that I actually had trouble at times discerning certain words.  Though it is easily made clear, it added a bit of reality to the novel.  I liked the personality she imbued into the characters and look forward to hearing her narrate again.

I look forward to listening to the next novel in this series.  The mix of dragon shifters, the hint of other mythological species along with the playfully intertwining stereotypes create an interesting and fun read.

A dragon never leaves his hoard unguarded. His heart is another matter.

The second eldest in an ancient line of Russian dragon shifters, Mikhail Barinov had one job: protect one of the family hoard of jewels. Distracted by the English virgin queen Elizabeth, who was as dazzling as she was devious; he lost everything. Five centuries of exile later, news that a construction crew has unearthed a massive trove of gold and jewels sends him racing to London, determined to steal back his family’s treasure… and his honor.

Professional gemologist Piper Linwood can’t wait to bury herself in her newest project, evaluating a hoard of Elizabethan-era treasure. But both her life and career are threatened when a mysterious, brooding man with a dangerous smile — and an even more dangerous kiss — snatches the lot.

Unwillingly swept along for the ride, Piper discovers Mikhail is no mere thief. And the dragon on his back is more than a tattoo. It’s a living, breathing extension of a bad boy she’s finding harder and harder to resist. But his heart is a treasure she can never own… because to save her career, she’ll have to betray his trust.