Audiobook Review: Out of Sync 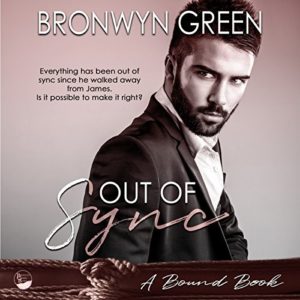 I always enjoy when one of my favorite reads is released in audiobook format. I appreciate “rereading” the book in the more dynamic format, especially if the narrator helps bring the emotion and characters to life. This is true of Out of Sync by Bronwyn Green.

Once a promising musician, Morgan Weaver walked away from what he loved to fulfill his father’s expectations. Now he’s stuck in a job he hates, working for the family business, spending little time outside the office. He hasn’t composed or played music in years, not since he walked away from his dreams, and the man he loved.

James (Jamie) Shepherd continued playing music after school, creating a life doing what he loves and is now a successful musician. Once roommates, James and Morgan haven’t seen each other in over ten years. However, James remained friends with Morgan’s sister, so when he finds out that Morgan is refusing to play at her wedding, James decides to confront the man who used to be his best friend, bringing them together in all the best ways.

“Right from the start, Out of Sync captured my mind and heart. I found myself engrossed in Jamie and Morgan’s story, uncovering what happened that drove a wedge between them, and watching them rediscover their passion and love for both music and each other. … The author does an amazing job capturing the longing and heartache both men have felt over the years. When they finally come together, it is amazingly sexy and passionate. I ached for the pair as they navigated the bumpy road to happiness. And their journey is filled with detours and potholes, causing this reader to cry out in heartbreak. I love the emotion the author packs into the story, crashing into me from all sides.”

The narration by Mr. Diamond adds value to this heart-wrenching and lovely tale. He pours so much emotion to the already packed story. He reaches deep for anguish, passion, and joy, adding soul to the characters. His voice and accents are lovely to listen to. But while I love Mr. Diamond’s voice, the Narrator, James, and Morgan’s voices are all similar, and I got confused over who was speaking, especially during moments of fast-paced dialogue. Slowing down the speed probably would help with that, but at 1.25x it just sounded too slow. (I listened at 1.5x.)

In the end, I found myself completed re-engrossed in Jamie and Morgan’s story. Mr. Diamond’s performance, while confusing at times, adds much to the story, taking this “A” book to an “A+.”

My Ratings:
Book: A+
Narration: A-

Everything has been out of sync since he walked away from James. Is it possible to make it right?

Ten years ago, Morgan Weaver walked away from everything he loved—his burgeoning career as a composer, his cello, and his best friend, James. Family obligations and guilt keep him tied to a job he hates, and his dreams have collected even more dust than his instrument.

James Shepherd was left reeling when Morgan abandoned not only their dreams of writing and performing together, but their friendship. James forged on to become an internationally known musician, but he’s always felt Morgan’s loss and has never been able to shake the feeling that he’s responsible for the other man’s choice to leave everything behind.

A simple request from Morgan’s sister brings the men together in a way neither of them expected, and long-denied desire bubbles to the surface overwhelming them both. Knowing it’s only temporary, Morgan finds himself lost in a haze of submission, finally able to experience being at James’ mercy and determined to enjoy it while it lasts. James, however, has other plans and is equally determined to show Morgan he can have all he’s ever wanted—including what they have together.