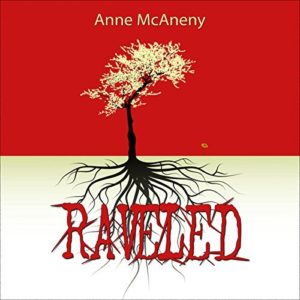 Suffice to say, I thoroughly enjoyed Raveled. It is an intensely emotional thriller as a daughter digs into a dark and haunted past on behalf of her incarcerated brother to uncover the truth of her father’s conviction of two heinous crimes.  It is an intriguing tale of two seemly unconnected victims, two different causes of death, and what seems an innocent man convicted by the court of community opinion prior to the end of the trial.  The accused man who is dead before the verdict and the sentence can be heard.

The story follows Allison, a woman who is deeply scarred by a monumental event and the scorn of her town.  She has put her hometown, Lavitte, and most of her youth behind her.  Allison isn’t really living, but surviving day to day.  She had no plans of digging into her father’s murder conviction sixteen years ago.  But when her brother begs her that knowing the truth could help his recovery from addiction, she concedes.  Allison could never have expected to uncover how deep the lies ran, nor how ugly the truth would be.  But her unwavering determination and the bittersweet healing that this investigation brings was captivating.  Though a truly darkly twisted truth is revealed, I was left with the hope that maybe, just maybe, Allison would be able to start living again.

To assist in conveying the overall story of what happened, Ms. McAneny expertly uses flashbacks told from the different perspective of those individuals involved in the events that torn the town apart.   From Mr. Fennimore, Allison’s father, to the different victims, the flashbacks fill in teasers of the truth.  Timed along with Allison’s discovery of different clues, the past and present work together as the truth is slowly revealed.  It was chilling and emotionally wrenching as we learn that Allison’s opinion of her father had been greatly overshadowed by the final events in his life.

Ms. Robert’s narration was absolutely excellent.  Her portrayal of Allison was compelling and natural.  Ms. Robert was able to provide varied and unique voices for the numerous other characters.  Her narration contributed to my enjoyment of this emotionally heartrending and nail-bitingly intriguing novel.  Though the plot line is disturbing, I can see myself listening to it again.

If an emotionally charged investigative thriller were something you are interested in, I would recommend Raveled.  Especially audio format, as the novel and the narration are perfectly paired in bringing the story to vivid life.

What’s a girl to do when her imprisoned brother begs her to delve into their father’s sixteen-year-old murder conviction? How about peel back the lies, upend the fairy tales, and roil the populace of Lavitte—a sweet apple of a town with a wormy, festering core? That’s what Allison Fennimore chooses. Despite her infamous surname and people’s wilted memories, this jaded cynic of a daughter sinks her teeth in and refuses to let go. She can practically taste the bitterness of that long-ago, twisted night when two teenagers died, linked to her father by bad luck and a few strands of rope.

Ignoring the dense local atmosphere where image trumps substance and lies become legend, Allison stirs the pot. The more layers she discards, the more elusive the truth becomes. And when a key source of information turns up dead, the dark edges of resentment coil in around her like a slowly tightening noose. As revelations get ugly, Allison may wish she’d never ventured toward the forbidden fruit of truth.