Audiobook Reviews: To Spell and Back 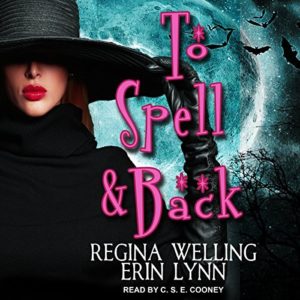 Things are truly coming to a breaking point for Lexi.  In To Spell and Back: A Lexi Balefire Matchmaking Witch Mystery she is able to learn far more about her past than she ever thought while also trying to procure living gold to repair the damaged Bow of Destiny.

I really do continue to enjoy a mystery that does not involve dead bodies and vicious plots.  Lexi is working at trying to learn more about her past in order to fully understand her capabilities along with being a force for good in the world.  Her dedication to bringing couples together and doing the right thing is refreshing.  I enjoy her bubbly personality along with the unique and capturing family that Lexi has created.  As Lexi goes about trying to find the material to fix the Bow, she discovers a secret about the ring the Mudwitch gave her.  Not only that, Lexi discovers there is far more to the history of the Balefire witches and that her grandmother may not be lost.

It was heartbreaking as we watch Lexi learn more about the past Balefire witches. Most specifically the relationship between her own mother and grandmother.  I enjoyed the parallel of Lexi trying to mend the bow and at the same time mending her own family’s secret past.  It was compelling.  As well as learning more about, the fairy godmothers and what they sacrificed to be a present and participating part of Lexi’s life.  I cannot decide what is more compelling, Lexi’s mission or the relationships around her.  The new friendship she developed adds another dimension and complication to Lexi’s life – but in a positive way.  Her adjustments to her best friend finding love is also another aspect of Lexi’s maturing.

Ms. Cooney continues to capture not only Lexi’s voice and personality, but also those of the varied other characters.  Her narration brings this series and the characters to life.  I look forward to listening to her narration for the next novel in this series.  Left with another surprising revelation, I am eager to see what happens next.  I continue to like the Fate Weaver series and look forward to the next light-hearted journey as Lexi continues to fight the good fight.

My Ratings:
Story: B
Narrator: A
Overall: B+

Wicked is in the eye of the beholder…

Lexi Balefire thought she was finished unearthing new and outrageous information about her heritage—turns out, she was dead wrong. Still reeling from the pain of ultimate betrayal, and the near-loss of her soul mate, Kin Clark, Lexi embarks on a journey through time, uncovering pieces of the Balefire family’s sordid past.

Her mother’s witch blood combined with the divine essence of her father, Cupid, makes Lexi the most powerful Fate Weaver on the planet—but she’ll need to repair the pieces of Cupid’s Bow of Destiny in order to finally claim her birthright.

The only way Lexi will succeed and keep her loved ones safe is to not get lost on her way to spell and back.