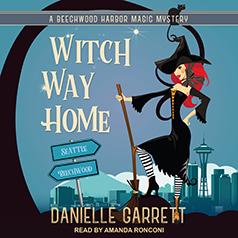 Witch Way Home opens shortly after the mysterious conclusion of the previous book, with our heroine, Holly the witch, reacquainting herself with the Seattle Haven after being banished for the past year. She’s preparing for her hearing with the Haven Council, hoping to gain permission to get her Master Potions license and reopen her store. Unfortunately, things don’t go well for her at the hearing, and it gets even worse when her SPA case worker, Harvey, suddenly leaves the hearing and goes missing. Once again, Holly ends up in the middle of a murder mystery and this time, he own future is at risk.

Witch Way Home was an absolute delight, and it addressed pretty much everything I felt was missing from (wrong with) the previous book, Witch Slapped. I loved the focus on Holly: both her quest for her Potion license and how the events surrounding the trial and murder mystery impact her life. Gone were most of the side stories and confusion surrounding Holly when she is around Nick. Don’t get me wrong, Holly is still questioning what she’ll do with her life, but it wasn’t couched in any sort of romance/man-related setting. It’s all her and what she’s going to do – what will make her happy.

I also am very happy that she’s not running around behind her friends’ or Adam’s backs when looking for answers to the murder mystery during this story. Holly relies on her friends, and even better, confides in Adam. This is such an improvement over the past couple of titles. And it’s not just with the mystery, but also with her concerns over Nick and the fact that the memory wipe doesn’t seem to be holding. The residents of Beechwood Harbor all come together to deal with/help Nick, and even Adam considers him a friend. *fist pump*

Once again, Holly and gang are brought to life through the performance of Amanda Ronconi. I adore her work and commend her interpretation of Holly. Ms. Ronconi convincingly portrays Holly’s thoughts, concerns, and expressions. She helps solidify Holly as a favorite character of mine. Her female voices are each a bit different and well-suited. However, her male voices tend to be a bit problematic for me, as many sound alike making it difficult to discern who is speaking from time to time.

In the end, I really enjoyed Witch Way Home. There was resolution of some of the earlier plotlines like Holly’s SPA battles, her potion making, Nick knowing about the world of supernaturals. I also liked that this book’s mystery was more personal for Holly and that she relied on the help of Adam and friends, rather than being secretive.

She’s fighting for her freedom but when her strongest ally is found murdered, everything is on the line—including her own life.

With her rag-tag band of supernatural friends in tow, Holly’s off to launch her biggest—and most dangerous—investigation yet. She must stop the killer without setting off the SPA’s alarms or else she can kiss her chance at freedom goodbye.