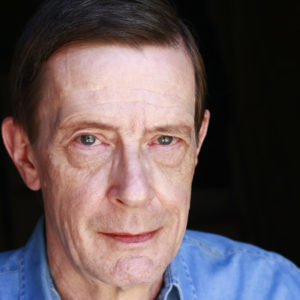 Yes, currently appearing on stage in LA at Will Geer Theatricum Botanicum in The Crucible.

Read in advance, note all speaking characters with notes on what author says about them, especially what they sound like.

Already did that – independently. I’ve narrated and produced all of the PD novels of Edgar Rice Burroughs.

I’m very keen on the ongoing Lit RPG series Awaken Online. I love the genre especially because I worked 14 years in the early video games industry as a programmer.

David’s growing catalog of audiobooks is strong on thrillers, horror, sci-fi and mysteries. His rich baritone voice also lends itself very well to non-fiction memoirs and history – popular and academic. His classical acting training at the Yale School of Drama makes him very strong with heightened literary language. Pegged as a “character actor” from youth, his facility with numerous characters is frequently praised by reviewers and listeners.

After graduation with an MFA degree in Acting, he found himself in the usual array of interesting day jobs such as casino porter at Lake Tahoe, ESL teacher in Iran and Egypt, and video games programmer in the Atari / Intellivision era. In parallel, he worked in film and TV for such directors as Steven Spielberg, Danny Boyle, and Joel Schumacher.