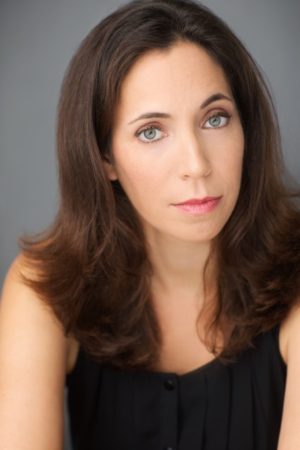 I have been narrating professionally since 2011, and as a volunteer since 2007.

I narrate mostly fiction, although I occasionally voice non-fiction. I’ve done classics, contemporary and historical romance, science fiction, fantasy, paranormal, short stories, children’s literature, mystery, thriller, YA, drama, poetry, and horror. I really enjoy historical fiction and romance, and have found a niche of sorts narrating Jane Austen-inspired novels. I’ve narrated all of Austen’s original novels at one time or another, as a volunteer and professionally, and have also done quite a few contemporary Austen “variations.”

I also work as a voice actor, and have done a variety of jobs, particularly for educational companies. Probably the most unusual job I’ve done was as an Irish-accented mermaid for a website that sells functional mermaid tails for children and adults!

It’s impossible to pick just one. I really enjoy when I get involved with a good series that’s ongoing. For example, right now I’m working on the Ginger Gold mystery series by Lee Strauss, which is a 1920s cozy set in London with a smart fashionista heroine. It’s great fun, with lots of colorful characters. Similarly, I’ve done seven books in the Alexis Carew series by J.A. Sutherland, which is SFF, a sort of Royal Navy in space story with a spunky, strong, complex young heroine. I’m always happy when the author gets in touch to say that he’s got the next one coming out soon.

It depends on the company I’m working for whether or not I talk with the author in advance. For the bigger publishers I usually do prep and research on my own and then work with a proofer and editor. For the independent companies like ACX, I am often in touch with the author from the beginning of the process and can get their input on the story and characters, as well as their preferences. Sometimes if I have to do a new accent I’ll do some prep work on that in advance. For example, I recently narrated a book (Crashing Together by Amelia Judd) that featured an Australian male lead and I did some research and practice to get that up to speed.

I would love to narrate anything by Margaret Atwood, who is probably my favorite living writer. She’s so prolific, very inventive, and excels at so many different genres and styles. I would also really like to narrate Mrs. Dalloway by Virginia Woolf, which I would already have done if it were public domain in the USA.

I’m a member of a couple of unique audio groups: The Online Stage, and Voices of Today, both of which produce professional public domain works. I work as an actor and producer for The Online Stage, which means that in addition to playing characters in plays by writers like Shakespeare, Chekhov, and Wilde, I also produce my own projects. In addition to plays, we do dramatic readings of novels, in which characters are voiced by a full cast. I’m currently producing a dramatic version of Dracula by Bram Stoker (in which I play Mina Harker) and will begin production next month on Howards End by E.M. Forster (which I will narrate). We recently released Forster’s A Room With a View (which I also narrated), and have done a number of wonderful charity projects, in which all of our royalties are donated. I’m very proud of the work that we do, and it’s a wonderful collegial group of actors.

Reading books out loud has long been a passion for Elizabeth. She has been a professional audiobook narrator since 2011, with over 150 titles available at Audible and elsewhere. She has been recording free audiobooks for LibriVox since 2007, and has produced over 60 solo recordings of novels, short stories, and poetry. She can also be heard voicing various characters in audio dramas at The Online Stage, and reading poetry at Rhapsodize Audio.