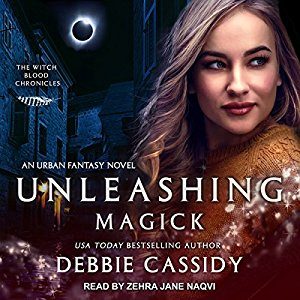 Unleashing Magick is the fourth and final novel in The Witch Blood Chronicles series.  I never realized that this was the last novel, but upon finishing, it was a satisfying conclusion to Carmella’s overall journey.

Carmella has overcome much, and this novel picks up right where the previous novel, Embracing Magick, stops.  She is struggling due to the strain of being the anchor between the witches and the skein (the source of magic).  Carmella is also still battling the mating urge of her asura/dragon nature.  Unfortunately, this is secondary to the impending doom in the form of cosmic gods who intend to take away humanity’s free will.  Nevertheless, Carmella is used to juggling multiple things; with the assistance of her friends (and some quick thinking), she is sure to save the world…just maybe not herself.

This final novel was a thrilling ride as our heroes attempt to get ahead and stop the cosmic gods.  However, they experience much of the old adage: “a little too late,” they never give up.  I do not want to give anything away, but I loved the twist at the end.  Carmella is loyal, courageous, and true to her word.  I really loved watching her grow and become the person she not only wanted to be, but the true best of herself.  Her romantic triangle is resolved – and I really loved her choice.  The fact that she wanted to make sure of her own feelings made me respect her even more.

Ms. Naqvi’s performance over the course of the series has been wonderful.  I enjoyed her portrayal of not only Carmella’s personality, but also the personalities (complete with varied accents) of the other characters.  With her expert narration, I was able to immerse myself in the world, and I look forward to revisiting these audiobooks.

If you are interested in a different urban fantasy world with a captivating and compelling mythology and determined heroine, The Witch Blood Chronicles are for you.  I highly recommend listening to the series as Ms. Naqiv expertly voices the characters and draws you in.  I hope Ms. Cassidy will continue writing in this world as I feel there are more stories to experience.

When it comes to war the only guarantee is death…

The cosmic gods are about to strike, humanity is on the verge of losing it’s free will, and Carmella Hunter and her friends are the last line of defence.

The task of being anchor between the witches and the skein is draining Carmella by the hour, but she isn’t one to sit by and let her friends do the work. With the clock ticking toward the eclipse, Carmella is determined to wrestle a plan B into place. With the dragon demi-god and his asura at her side, Carmella will be making some huge leaps of faith.

When the eclipse arrives, Carmella plans to be ready, but even the best laid plans can get derailed, and Carmella is about to learn that when it comes to war the only guarantee is death.