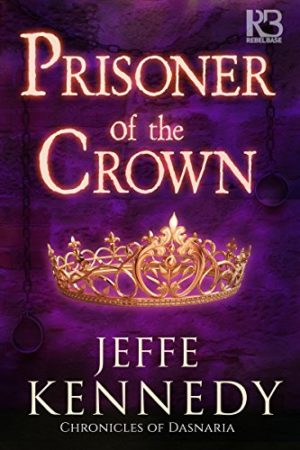 Prisoner of the Crown
Author: Jeffe Kennedy
Reviewer: Gikany and Una
Rating: B-

Prisoner of the Crown is a spin-off trilogy that will tell the tale of Jenna, the lost Princess of Dasnaria.  Overall, this prologue is gripping but, this is not a fun romantic fantasy novel.  This is a dark story of gilded lies hiding dark and evil monsters.

For those who have been following The Twelve Kingdoms or Uncharted Realms series, this is the story of Harlan and Kral’s sister, Jenna, who escaped from a nightmarish marriage full of abuse and rape.  The Chronicles of Dasnaria is a trilogy that will fill in the gaps of what became of Jenna.  Since the reason why she escaped her marriage was alluded to in the previous novels The Talon of the Hawk and The Edge of the Blade, the brutality Jenna suffers under the hands of her husband Rodolf should not have been so surprising.  Thankfully, Ms. Kennedy is able to convey the violence and horrific events without gratuitous detail all while not glossing over the trauma of the encounters.  This was a difficult read for us.  The majority of this book is the setup building to Jenna’s eventual narrow escape.  Although the book was difficult to read, the last few chapters of the novel were worth the price.

We have made no secret that we are not fans of Kral.  If you were questionable about him in The Edge of the Blade, you may, like us, dislike him even more after this novel.  However, the experiences in this novel may have planted the seed of change in we see in him by the time he encounters Jepp.  We have no love lost for the Dasnaria culture.  Through the gears that have started moving in The Edge of the Blade and Prisoner of the Crown we have hope that change will reach this kingdom.

Although it is a truly difficult story to read, the novel ends with bright hope for a better future for Jenna.  We look forward to the next book in this trilogy and the promise of a happily ever after for not only Jenna, but also all Dasnarian people.

She was raised to be beautiful, nothing more. And then the rules changed . . .

In icy Dasnaria, rival realm to the Twelve Kingdoms, a woman’s role is to give pleasure, produce heirs, and question nothing. But a plot to overthrow the emperor depends on the fate of his eldest daughter. And the treachery at its heart will change more than one carefully limited life . . .

Princess Jenna has been raised in supreme luxury—and ignorance. Within the sweet-scented, golden confines of the palace seraglio, she’s never seen the sun, or a man, or even learned her numbers. But she’s been schooled enough in the paths to a woman’s power. When her betrothal is announced, she’s ready to begin the machinations that her mother promises will take Jenna from ornament to queen.

But the man named as Jenna’s husband is no innocent to be cozened or prince to charm. He’s a monster in human form, and the horrors of life under his thumb are clear within moments of her wedding vows. If Jenna is to live, she must somehow break free—and for one born to a soft prison, the way to cold, hard freedom will be a dangerous path indeed….

With our hair finished, our ladies began the intricate task of wrapping us in our fancy klúts, the finest we’d ever worn—ones for grown women, not girlish ones for lounging about the seraglio. Inga’s was of turquoise silk, a shade deeper than her eyes, and the delicate silk shimmered with hints of violet and green as it snugged around her waist and emphasized her generous bosom. She wore little jewelry, as befitted an unmarried maiden, but the simple silver chains adorning her throat and wrists shone with elegance. Her finger and toenails had been polished a subtle silver, too, and her ladies draped her klút to frame her slender bare feet, the silver rings on her toes connected to the graceful chains that looped to her ankle bracelets, all studded with aquamarines.

A woman’s feet reveal her status, and ours were perfect in every way.

I wore more jewelry, as a betrothed woman. Mother had given me the Elskadyr pearls she’d worn to her wedding. They suited my virginal status, and would also serve to remind my future husband—and all present—of the wealth of the Elskadyr family.

“And you, the greatest pearl of them all,” Mother had said the night before when she gifted me with the heavy chest. Kaia had to call three girls to carry it back to my apartments. “You will shine like the jewel you are, until your husband can think of nothing but having you for his own—the most valuable of all his treasures.”

“But… I will be first wife, yes?” I’d asked, pausing in my gleeful enjoyment of sliding a rope of pearls as long as I stood tall through my fingers.

The empress gave me an impatient look. “You are His Imperial Majesty’s firstborn daughter—of course you’ll be first wife.”

I breathed an internal sigh of relief. The phrasing that put me as one of his treasures had given me a start. I would not wish for a life such as Saira or Jilliya led. I’d been obedient all this time so I would have the power my mother wielded.

And so I wore white. Pearlescent white, the shimmering silk matched to my skin over painstaking weeks of effort, the dye girls suffering under my mother’s whip-sharp attention and Hede’s actual whip. Other ladies had spent the entire morning gluing opalescent shells to my finger and toenails, extending them to elegant lengths and filing them to perfectly matched and even rounds. I’d been wearing practice ones on my toes for months, so I’d learn to walk and dance without breaking them off.

With the priceless silk so fragile, so carefully perfected with effort and suffering, I had not worn it until this moment. Where the quantities of pearls weighed on me like nothing I’d felt before—from the swaying bands on my feet to the strings of them wound into the hair falling down my back—the klút seemed to be hardly there at all. Perhaps because it matched my skin so exactly, it seemed as if all of me showed through.

Surely not, though, for that would be unforgivably immodest in an imperial princess. Still…

“Do I look all right?” I whispered to Inga.

Her face showed guileless sympathy and she took my hand. “You look like a pearl come to life. You will dazzle them all.”

“You will,” I returned, wishing I could be the one wearing the lovely turquoise klút.

She shook her head. “No one will notice me. I’m happy to be in your shadow. I’m so excited to go with you!”

I squeezed her hand. “This will be a night we’ll remember always, and we’ll tell our own daughters the story.”