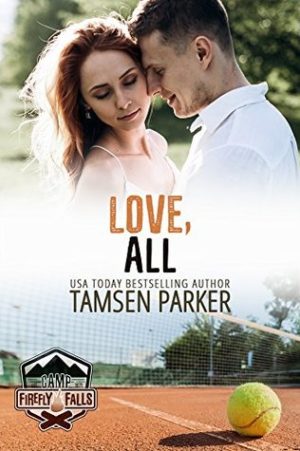 Love, All
Author: Tamsen Parker
Reviewer: B.
Rating: B+

From the very beginning, I liked the way Ms. Parker sets the stage for Ruby and Nate’s story. Love, All begins with a wedding, including pretty, accomplished guests, a devoted brother/best friend, and one exhausted single mom who manages to ruin said brother’s pants thanks to fatigue and gravity—and the rather unfortunate destination of some dubiously constituted salad dressing. It would be hilarious, if not for the seriousness of Ruby’s situation.

Ruby was easily my favorite of the two characters. As a single mom, she’s exceptionally capable, intelligent, resilient, determined, and viciously protective of her daughter, Chloe. The trade-off being, of course, that she’s tired, sometimes lonely, and always bracing for the next storm to hit. But, she knows exactly what she can take, is brutally economical when it comes to her own needs, and has no problem seeking her pleasure with Nate without the desire for any promises or attachments.

Nate’s entire world, on the other hand, is so different that it’s amazing they were able to find common ground at all. He’s privileged, but he acknowledges it. He isn’t judgmental, nor does he try to cast himself as a “Prince Charming” who expects Ruby to be grateful for his attentions. He seems supportive, patient (for the most part), and absolutely willing to own up when he makes a mistake. He’s a good guy.  He did make me cringe once or twice over the course of the narrative, but he tries really hard. The thing is, sometimes that’s just not enough.

On the whole, I thought Love, All was a great introduction to a new author for me. Ruby is sexy and fierce, and I could readily believe how difficult it must have been for her to let herself need someone else—even for a little while. Nate was quite likable, too, if less well-defined than Ruby, and I was happy for them both by the end. Having enjoyed Love, All, I want to go back and read the previous story in the series, since Nate’s best friend was also a favorite character for me. Ms. Parker has tackled a complex situation here, and I think she’s done so very well. I’m looking forward to exploring more of her work in the future.

Nate Carter is living the good life. Taking a break from his engineering day job to be Camp Firefly Falls’ resident tennis instructor, he’s got nothing on his plate besides acting as best man for his sister and his BFF’s wedding, and avoiding a summer-ending injury like the one that side-lined him last year.

An unfortunate incident involving salad dressing and his tuxedo finds Nate face-to-face with struggling single-mom Ruby Hudson who’s moonlighting as a cater waiter. After their calamitous meeting, they have a far more satisfying end to their evening in the back of Ruby’s ancient station wagon.

Nate is keen for a repeat or even a relationship, but Ruby doesn’t have time for the handsome tennis player no matter how sexy his forearms are. But after convincing her to give him a shot, Nate thinks their relationship might be able to go the distance.

The end of the season is fast approaching and Nate is ready to put his heart on the line, but his assurances and their chemistry may not be enough for Ruby to upend her life. After all, in tennis love means nothing.

Reviews in the Series:
In Her Court by Tamsen Parker (Standalone, Camp Firefly Universe)