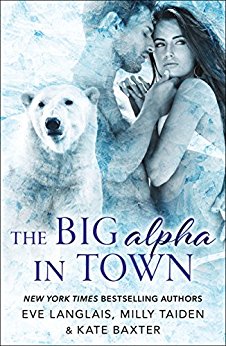 The Big Alpha in Town is a lighthearted but passionate anthology with three distinct romantic journeys.  Overall, I liked the stories and though these were great introductions to these new-to-me authors.  Please see my thoughts on each of the novellas below.

Bearing His Name is the first story featuring a bear shifter in a very awkward position.  Ark is investigating an anonymous letter stating he is the father of a soon-to-be born baby boy. Unfortunately, he and several of his cousins were at the same party, wearing the same costume, and received the same letter.  However, while trying to find out the truth, he meets his mate, the pregnant woman’s older sister.  This story was hilarious and I liked the contrast of Jade’s no-nonsense personality with Ark’s lackadaisical one.  The quirky, tongue-in-cheek love-story flows well and was pretty entertaining. B+

Owned by the Lion is a tale of the local lion-shifter playboy finding his mate in the beautiful and seemingly not interested friend’s little sister.  Keir’s womanizing ways is well-known by everyone, including Ally.  She has known him most of her life and has enjoyed viewing him from afar.  However, with a new business venture, she is working closely with him and fighting hard to remember he is not her type.  This story was also humorous as we watch Keir trying to figure out how to prove to Ally that now has eyes only for her.  It was an enjoyable quick read.   B

No Need Fur Love is the final tale in the anthology.  This romantic journey was more somber and thrilling.  It was a gripping tale of a wolf-shifter who discovers his mate, not realizing Mia is only looking for a one-night stand.  Mia is the daughter of the leader of a band of Nymphs.  In order to have her father allow her to join the leadership, she has either to produce an heir or mate.  Not interested in having another male dictate her life, she sets out to get pregnant.  However, things do not go as she planned.  Wolf shifters go mad without their mate once meeting them.  Owen only has a few days to find Mia before the full moon will require his alpha to put him down.  It was fascinating how the different plots of Owen and Mia intersected and entwined.  This story was my favorite in the collection.  A-

My Overall Rating: B+ Liked It A Lot

Bearing His Name by Eve Langlais

Meeting his mate should have been cause for celebration. There’s just one teeny tiny problem. Jade thinks Ark might have impregnated her sister. He didn’t, but convincing Jade is going to take a bit of honey.

Owned by the Lion by Milly Taiden

Keir’s been told to stop playing the field and settle down—difficult advice for a hard and hot man with a lion’s heart to follow. But his sights have always been set on Ally. She’s his mate, plain and simple. With her sweet and delicious curves, she’s nothing but sugar and trouble all rolled into one. But he’s known her and sparred with her for years. She’s his best friend’s little sister, and it’s going to take a whole new level of convincing that he’s the mate for her.

Moving with his pack to the tiny town of Stanley, Idaho has Owen Courtney a little on edge. With literally no women in sight, Owen will be lucky to find a date, let alone his true mate. But you know the saying about a werewolf walking into a bar…

Gorgeous wood nymph Mia Oliver is on a mission: Find a suitable male to get her good ‘n pregnant and provide her with an heir. But when Mia decides to pick up a gorgeous and oh-so willing werewolf at the bar, she realizes she might be in over her head. …