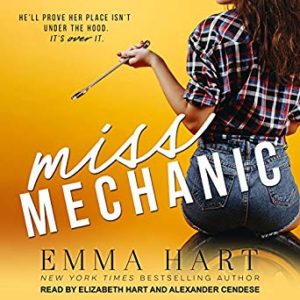 Miss Mechanic is another witty and absolutely wonderful standalone romance between two unlikely colleagues.  Though it follows in a similar vein as Miss Fix-it, they are truly standalone.  But if you enjoy laugh-out-loud humor paired with breaking stereotypes and passionate romance, you should read both.

Jaime is a gal who knows who she is and what she likes to do.  I immediately felt a kinship with her.  After her father lost his garage, Jaime lost her place of employment along with the future she thought she would inherit.  When she sees that the old shop has a help wanted sign, she can’t help but apply.  The first interaction between Dex and Jaime is hilarious and it only gets better from there.  As their irritation with each other goes from dislike to sexual tension, it’s only a matter of time before they spontaneously combust.  But Jaime is determined to prove that she not only can do the job, but she can run the garage better than Dex.

Speaking of Dex, he is just as infuriating as he is fascinating.  His family is adorable and wonderfully down-to-earth…complete with open and frank honesty, much to Dex’s chagrin.  When they find out about his new mechanic, his father is concerned and his Aunt is…pushy.  Dex worries that his family will end up keeping Jaime and giving him the boot.  The romance between Dex and Jaime is compelling and heartfelt.  I enjoyed their dance as they went from enemies to lovers.  Truly, Dex’s sister and his niece almost steal the show.

Miss Mechanic is another passionate and humorous contemporary romance romp by the talented Ms. Hart.  I have my fingers crossed that she will write another such atypical career female bringing her future lover to his knees.  I cannot recommend this novel enough.

Two mechanics. One rivalry. She’ll prove she’s as good as she says she is. He’ll prove her place isn’t under the hood. It’s over it.

“Don’t let the bastards get you down.”

For 26 years, I lived by my daddy’s motto. Which is why “Mechanic Wanted” is all it takes for me to apply for the job at the garage we once owned. And I meet the biggest bastard of them all: Dexter Ryne. Hotter than hell in July and a firm believer that my place is on reception, taking phone calls, and looking pretty. Not getting dirty under the hood of a car.

Determined to prove each other wrong, we make a deal. I have three weeks to prove my worth as a mechanic. If I don’t, I’m on telephone duty. If I do, he’ll accept defeat and make my job permanent. Now, all I have to do is fight my attraction to the cocky little…beep. Problem is, an engine isn’t the only thing he knows how to make purr….