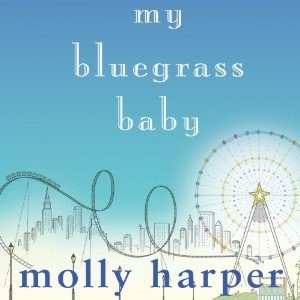 Already a fan of Ms. Harper’s Jane Jameson and Half-Moon Hollow series (also narrated by Ms. Ronconi), I knew I needed to try her contemporary Bluegrass series. The first book sets up the world of Sadie Hutchins, the assistant director with the Kentucky Tourism Commission. While there are no vampires or shifters, I felt like she could have been friends with Jane and lived her world, as the quirky characters and silly shenanigans were very similar.

Sadie’s boss, Ray, is retiring, and she is ready to step into his shoes. She loves her job and cannot wait to take things to the next level. That is until Ray tells her big-city Josh was promised the job by the Commissioner himself. So Ray sets up a competition for the job, with the winner getting the promotion.

What seems like a difficult situation for a romance plot, the battle for the job creates hilarious situations and, eventually, a reason for Josh and Sadie to get together. I appreciated that they fought their mutual attraction for as long as possible for the sake of fairness and such. The pair’s back-and-forth nature was entertaining and created wonderful sexual tension. And when they finally gave into their passion, it was explosive. The fact that they were coworkers, and eventually one would be the others boss, was handled well, until the end, when it really became a bit unrealistic.

Amanda Ronconi has that perfect southern charm for her narrative voice. She varies her tone just enough to create a handful of characters. While the familiarly had me thinking of the Jane books, after a while I was in Sadie’s story. The timbre and pace was familiar and comforting, wrapping me up in the story without lulling me to sleep.

Overall, My Bluegrass Baby is a delightful, happy romance with all of Ms. Harper’s trademark humor. She creates the most interesting, unique characters and brings them to live via silly escapes and fast-paced banter. The story is an escape. It’s joyous and full of life.

When Sadie and Josh compete for the same Kentucky Tourism Commission job, sparks fly – turns out Kentucky really is for lovers.

Sadie Hutchins loves her job at the Kentucky Tourism Commission. Not only could her co-workers double as the cast of Parks and Recreation, but she loves finding the unusual sites, hidden gems, and just-plain-odd tourist attractions of her home state. She’s a shoo-in for the director’s job when her boss retires at the end of the year…until hotshot Josh Vaughn shows up to challenge her for the position.

Josh is all sophisticated polish while Sadie’s country comfort, and the two have very different ideas of what makes a good campaign. So when their boss pits them against each other in a winner-takes-all contest, they’re both willing to fight dirty if it means getting what they want. But it turns out what Josh and Sadie want could be each other – and Josh’s kisses are the best Kentucky attraction Sadie’s found yet!