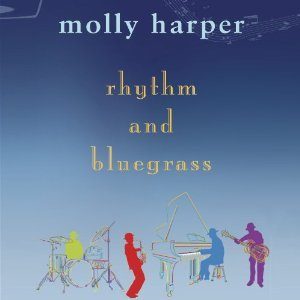 The second story in Ms. Harper’s entertaining Bluegrass series follows Bonnie Turkle, a historian with Kentucky’s Commission on Tourism. Although the story is loosely tied to the first book in the series, it is completely standalone, and I think it takes place before the first book, as it mentions her boss’s boss, Ray, who retires in book 1: My Bluegrass Baby.

Bonnie loves history, especially preserving small town Kentucky’s unique stories. So when she discovers how amazing the closed down McBride’s Music Hall truly is, she opts to preserve and protect it, even if it means putting a road block in the way of a new underwear manufacturing plant. Although Bonnie’s had no intention of actually stopping the plant, her actions were proclaimed devious and underhanded by her man-crush and town mayor, Will McBride. The story tells how Bonnie makes it through the troubles and delivers on her promises to her adopted home, Mud Creek.

Overall, I enjoyed Rhythm and Bluegrass more for it’s silly stories and look at preserving history, rather than the romance between Will and Bonnie. I loved following Bonnie as she unravelled the mysteries of and pieced together the stories behind McBride’s. Her passion for her work and the discoveries was contagious. I also enjoyed the developing friendships with her landlady, the local sheriff, and the town’s librarian. They were organic and true, adding depth to the characters and plot line.

While Will and Bonnie were cute together, I felt that their relationship was a bit weak. They started as flirtatious friends, even enjoying a very passionate kiss that made my belly flutter. However, Will’s desire to protect his town and the people in it lead him to do some pretty awful things to Bonnie and her reputation. Although Bonnie felt some of it was deserved, I didn’t. I felt it crossed a line. Bonnie rather, continued to look up to Will, seeing the good in him. Eventually he did apologize, but honestly, it was too late in coming. Their book ends with an HFN, which suits the story.

I always enjoy Amanda Ronconi’s narrative voice and overall performance a lot. Her style gels well with Molly Harper’s offbeat characters and silly humor. However, I don’t like that Ms. Ronconi uses the same narrative voice for each of the first person characters, who are different in every book, especially since I tend to listen to the books back-to-back. It’s not enough to diminish my rating, but it does take me a while to adjust to a new character without thinking of the previous book’s main character. I did enjoy her voice for Will, which was the perfect blend of southern charm and small town drawl.

In the end, Rhythm and Bluegrass is a cute and entertaining story. While it’s not overly romantic or sexy, it was fun to listen to and enjoy.

My Ratings:
Book: B
Narration: A-

Bonnie Turkle, multimedia historian for the Kentucky Commission of Tourism, is dispatched to Mud Creek, a tiny eastern Kentucky town, with few prospects but many oddballs, to rescue important artifacts from McBride’s Music Hall. Now fallen beyond disrepair, McBride’s was once a jewel of the early American music scene, an intersection of the country-western and rhythm and blues circuits. The former owner’s grandson, Will McBride, who also happens to be Mud Creek’s esteemed mayor, would like nothing more than to see the place bull-dozed in favor of a factory that will provide much-needed jobs to his citizens. But Bonnie finds evidence of a legendary musical event at the music hall and her plans to turn it into a museum put Mud Creek’s economic future at risk – not to mention the growing flirtation between the two of them. If Will and Bonnie can’t find common ground, the town’s past and future will be lost.