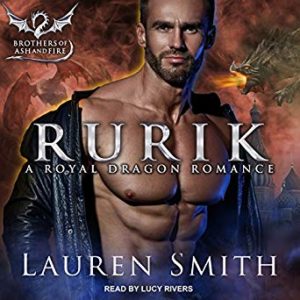 Rurik is the third novel in the fascinating Brothers of Ash and Fire series.  I liked the journey of the youngest (and yet strongest) of the Russian brothers.  Charlotte and Rurik’s romance was fairy-tale-esque, until the Barinov’s mortal enemy tries for his ultimate revenge.

Rurik is the battle-dragon of the family.  He was raised to believe that he could never mate as it would make him vulnerable; thereby creating a weakness that could harm the family.  Rurik believed in his duty so much, that the first female that stirred his dragon as a possible mate, he avoided.  After she is killed, he convinces himself that he is now beyond finding a mate – until Charlotte walks into his bar.  Instantly he is given a second chance at mating – one he won’t throw away.

Charlotte is the sister of the leader of the Brotherhood – a group of supernatural assassins.  She hopes to make contact with Rurik and bring him in so both sides can finally build trust.  However, things do not go as planned as she finds herself completely enchanted by the dragon shifter.  Everything she was taught does not appear to mesh with her interactions with Rurik.  After an attempt on Rurik’s life, Charlotte finds herself whisked away for safety and seduction.  However, this Romeo-Juliet-esque romance could end with their two families headed for war.

I really enjoyed this final novel in the Barinov family arc.  The conclusion to the long feud is satisfying as well as Charlotte and Rurik’s happily-ever-after (HEA).  Though it could be the end of the series, I hope that Ms. Smith will continue to write in this world.  It would be fascinating to follow characters of the Brotherhood (especially Charlotte’s brothers) and see if and where their HEA’s lie.

Ms. River’s narration was so exceptional, while listening to Rurik talk; I completely forgot it was being narrated by a woman.  At times I had to check as I thought there were dual narrators.  Her accents for the different Russians along with the Brazilian dragon clan members were quite convincing.  These characters were truly brought to life by her narration and I look forward to listening to her again.

Overall I enjoyed Rurik and Charlotte’s romantic journey.  The final conclusion of the overarching rivalry between the Barinov’s and the clan was deeply satisfying.  If you enjoy passionate but light urban/paranormal romance, the Brothers of Ash and Fire are for you.  I highly recommend listening to this series as the narrator is outstanding.

The fiercest of a royal line of Russian dragon shifters, Rurik Barinov spends most days defending his family’s homeland from rival clans. By night, sins of the flesh-drinking, dancing, and sex keep his volatile warrior dragon in check. Barely. With his choice of mortal women to bed, he has no interest in changing his bad-boy ways – until a creature of molten sex poured into a tiny red satin dress steps into his nightclub. A jagged edge of raw desire nicks the impenetrable armor around his heart.

Charlotte MacQueen has been told since childhood to stay in school, live a normal life. Leave the family business – hunting down dragons – to her brothers. But tonight, she’s shed her chemist’s lab coat and infiltrated enemy lines to bag a dragon of her own. She never expected sexy, all-too-wicked Rurik Barinov to capture her, body and soul – the perfect weapon to use against her brothers. Or that she’d fall for the brave, battle-scarred dragon shifter who covets her heart like the most precious of jewels.