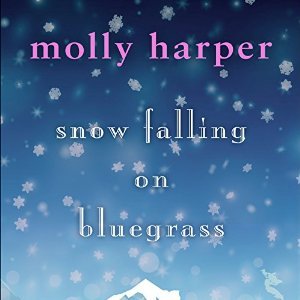 Jumping back into the office shenanigans of the Kentucky Commission on Tourism, Snow Falling on Bluegrass sets up listeners/readers for the potential romance between Kelsey and Charlie. Since the first book in Ms. Harper’s Bluegrass series, we’ve known Kelsey has it BAD for Charlie, but stayed with her loser live-in boyfriend because she felt she didn’t deserve better. Well, loser Darryl got a “better offer,” leaving Kelsey weeks ago, and it finally sunk in how horrible of a man he was. Now, off on a long-weekend work retreat, Kelsey is looking for some rebound action, and park ranger Luke, may be just the one to fulfill her needs.

Picking up after the events of the first two books, the KTC staff is back together and trapped without power when a freak snow storm hits Kentucky. After missing most of the characters in the previous book, I was both thankful and happy to have Sadie, Josh, the “nerd herd,” and even some new employees, all together again. They play off one another in the silliest of ways, and their situation is ripe with hilarious opportunities.

I appreciate that although the book blurb and earlier parts of the story set the stage for a love triangle, the focus truly is on Charlie and Kelsey. I love Josh’s character and would have loved for him to have his own book… maybe someday *sigh*

I do like Charley and Kelsey together. They had some good-sized hurdles to jump, and therefore, I appreciate that their story ends with an HFN and a promise of more to come. Between denying their own feelings for years and the fear of losing a friendship, both characters have made some poor decisions over the past three years. I was not happy at the continual delays in get it all out, but in the end, I liked the way it all went down.

Once again, the book is narrated by Amanda Ronconi. While I noticed that the three primary females (Sadie, Bonnie, Kelsey) all have very similar voices, each fitting for a first person POV, as well as, the individual characters, who were all similarly silly and somewhat neurotic, Ms. Ronconi did an excellent job mixing up the male voices. She kept Josh, Will, and now Charlie, consistent from book to book, each easily identifiable and mostly unique. I enjoy Ms. Ronconi’s narration, so the fact that the characters tend to bleed over doesn’t necessarily bother me, it just made it difficult to discern who was talking sometimes. But overall she does a great job with Ms. Harper’s characters, giving them wit, sarcasm, and soulfulness.

Overall, Snow Falling on Bluegrass is yet another enjoyable, silly romp into Western Kentucky with some extremely likable characters. This third, and presumably final title, in the series was probably my favorite, as I had come to know the characters, becoming invested in their well-being. I liked that Charlie and Kelsey finally got their feelings out in the open, but didn’t rush into forever, knowing they needed to take it slow and savor every moment.

Kentucky Tourism Commission employee and executive assistant extraordinaire Kelsey is known around the office for having everything under control. So it’s not surprising that she and her boss, Sadie, have everything planned to the second for the office winter retreat. But there are things even Kelsey can’t micromanage.

An unprecedented snowstorm smothers half of Kentucky and knocks out the power, closes the roads, and generally shuts down the state. Luckily, the lodge has working fireplaces and enough food to keep the staff from turning on each other like something out of The Shining. Kelsey wouldn’t mind being stuck inside if it wasn’t for the tension with her not-so-secret crush, Charlie, the office’s statistician. But handsome Ranger Luke, the lodge’s only employee on hand, is there to take Kelsey’s mind off her discomfort.

Even though this weekend is supposed to be a planning session for KTC, Kelsey can’t help her mind from wandering and finds herself conflicted over Luke and Charlie. Someone’s love will keep her warm, but whose will it be?