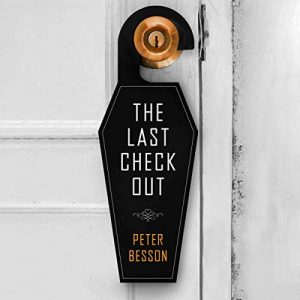 I’m probably one of the few people who liked the 1998 movie What Dreams May Come. After reading the description of The Last Checkout, it was the reason I accepted to do the review. What Dreams May Come was a beautiful visual interpretation of the book by the same name, exploring the idea of loving someone so much that you would literally go to hell to pull them out, because heaven wouldn’t be heaven without them. I cried like a baby while Chris pleaded with his wife Annie, who put herself in hell by committing suicide, to come back with him.  She has the freedom to leave but cannot get past her own tortured thinking.  The movie is thick with symbolism and imagination, travels through darkness, but doesn’t linger there unbearably long, and ultimately has a bright, happy ending.  No question it’s an emotional road.  Definitely not a light date night movie.
https://www.youtube.com/watch?v=508omJosuIQ

So I thought I was mentally prepared for The Last Checkout.  It is dark and heavy, more of both than I think I was expecting. The description makes it sound much more optimistic than it is. The greatest act of love in this book feels more like a stunt than a grand gesture. The biggest contributor to that feeling of heaviness is that nearly all the characters in the book are suicidal—that is why they’re at the Hotel Terminus.  They’ve come there to die, to commit suicide, including the two main characters.  The thing they share, that binds them together, at least initially, isn’t love, it’s a death wish.  Sort of the opposite of What Dreams May Come.  Besson has clearly done his homework.  There is a great deal of thought and mental processing throughout the book.  I doubt the average reader has done this much thinking about the realities of life and death or the fragility of the human body.

The writing is very good, almost poetic at times, which made it hard to turn off, but, for me, the gloom and doom of the first half of the book made it necessary.  In that sense it reminds me of Jacob I Have Loved which was also really well written, but so depressing I would never recommend it to the teen audience for which it was written. Adults readers of The Last Checkout can certainly pace themselves, but the writing wants to draw you in, make you a resident of the Hotel Terminus too.  The reader is nearly fifty-percent into the story before there is a glimmer of light.  By then I wasn’t sure I cared anymore.  Besson did such a good job of convincing me that they were going to die, I didn’t want to keep going.  In fact, despite the number of explicit romances I’ve read, this was the first time I felt like I was an intruder, looking in on something so intimate that I had no business being there.  I’m not sure how to rate this book.  It is well written, the story is thoughtful, complete, and original. I honestly can’t fault it, I just wouldn’t have chosen to read it. It will appeal to a very specific type of reader.  Proceed with caution.

The narrator has a deep, gravelly voice that fits this dark piece.  His voice is clear and easy to understand, but I think his performance took a dark story and made it feel darker. He does not perform voices, but rather narrates the story with emphasis.  I wonder how I would have felt about the story if the narrator had been a woman.

If there ever was a bad time to fall in love, dangling by the neck from a rope tied to a chandelier would be it, but love just doesn’t care….

By the year 2031, global warming cooks the planet, endless wars sweep the globe and pollution tries to finish everybody off. Science has declared re-incarnation a fact and legally sanctioned death houses have sprouted up like mushrooms in overcrowded cities. Those so-called “Last Resorts” provide the paying guest with the tools and the know-how for a successful exit from life – with one simple rule: once checked in, the check-out is feet-first only.

Nobody leaves a “Last Resort” alive.

Ansel Grayson has been a resident at the ‘Hotel Terminus’ for over 12 years, unable to take the last step. On the day he finally works up the nerve to check out and hang himself, he is interrupted by Nikki Forlan, the most recent addition to the guest list.

Ansel and Nikki, broken by life, find themselves drawn into each other’s orbit, and with their final check-outs looming, they try to discover a reason to live, certain they will have to die.