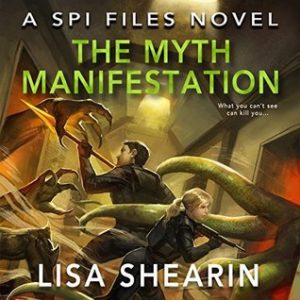 Taking place a few months after the conclusion of The Ghoul Vendetta, The Myth Manifestation features a summit of most supernatural races that reside on Earth. It’s been a hundred years since they last came together in the name of peace, and SPI is carefully monitoring (and providing security for) this huge shindig being held at one of Lord Rake’s hotels. Unfortunately, politics and magic get in the way of a smooth event and the occupants become locked inside a pocket dimension. It’s up to Mak and SPI to save the day once again.

The Myth Manifestation is the fifth full-length title in Ms. Shearin’s SPI Files series but could probably work as a standalone if one is unfamiliar with the series. Each book’s storyline is standalone and the author provides more than enough background to help new readers adjust to her world. The few threads of story arcs that jump from story to story, such as Mak and Rake’s relationship, aren’t strong enough to demand a read from the beginning of the series.

The story within The Myth Manifestation is solid, and there is subterfuge-a-plenty, making it exciting at times. However, it took too much time for my liking to get to the meat of the story; I found the tale slow and repetitive until over three-quarters into the book. Yet, I found the puzzle of what was happening and why an interesting mystery to solve.

Having read/listened to the series from the beginning, I have struggled with the storytelling in the last couple books. While it was probably like this from the beginning, it becomes more noticeable with each subsequent book I listen to in the series. The crux of my issue is that while the story is shared from first person POV of Makena, it’s told as if she’s explaining the story to someone else rather than as if she’s experiencing the action. I feel like the lengthy explanations and repetitive reminders don’t fit with the first person POV. I want to live through her experiences not have her explain them to me. And she is constantly repeating herself, giving readers (listeners) repetitive reminders and descriptions.

I also continue to struggle with the romantic story arc involving main character Mak and Goblin Lord Rake. While I was pleased that the author significantly reduced the Mak/Ian page time, making them feel more like the partners they are and not potential love interests, I still feel that she is doing a disservice to the potential/existing romance. At the end of the previous book, it seemed as if the pair were finally a committed couple, but at the start of The Myth Manifestation, we find Mak wondering if they are together or not. The entire aspect of the series is wishy-washy and it frustrates me. The problem is we just don’t see any of their romance; we don’t see them together as a couple. Either make it a solid part of the story or get rid of it. I don’t need explicit scenes, just them spending time together not working.

The narration by Ms. Parker continues to be a shining part of the series. She gives a solid voice to Makenna, bringing her to life. I love the southern drawl and the measured cadence of her storytelling. It is comforting and familiar, but also emotional, especially when Mak is worried or angry. The supporting characters’ voices are equally as familiar by this point, but I still struggle with some similarities between Rak and Ian.

In the end, I mostly enjoyed The Myth Manifestation; however, Ms. Shearin’s method of storytelling is wearing on me. I like the characters and love the world she’s created, but feel the constant repetition hinders the development of the story.

New York is one of the most popular convention destinations in the world—for humans and supernaturals. Every hundred years, rulers of thhe world’s supernatural races come together to negotiate and renew a peace treaty. Meeting in the same hotel are the governors of our world’s goblin and elf colonies. SPI is saddled with the security nightmare of keeping the living delegates alive and the undead delegates from becoming permanently deceased. We’ve got our work cut out for us.

I’m Makenna Fraser, seer for SPI. Our security nightmare becomes real when monsters from the delegates’ mythologies begin mysteriously appearing in the flesh to hunt delegates from every side of the debate. And when the hotel gets sucked into another dimension, there’s no escape.

We discover that we’re all pieces in an elaborate and deadly game. A game about to spill out into the real world. Failing to escape is game over and not an option. We have to save the world—but first, wee have to save ourselves.