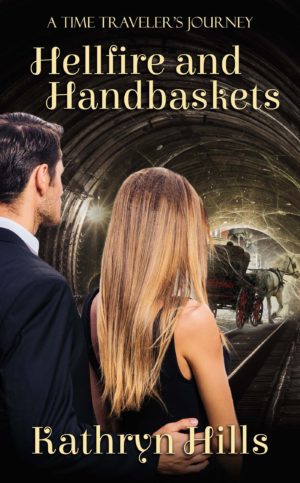 Hellfire and Handbaskets is the second novel in the Time Traveler’s Journey series. It was a sweet romance coupled with a fascinating mythology of time travel.

Though I did not read the first book, it in no way diminished my pleasure in reading Amelia and Rick’s story.  Amelia is a bit ahead of her time.  An intelligent woman bristling at the societal confines of Victorian Boston.  She is able to attend medical school only to find the professor singles her out for his own jealousies of her family or so it seems.  One night she and her best friend, Rose stumble across an injured man.  After rendering some first aid, he is taken to the hospital.  Amelia is compelled to follow up on her first patient, but knows the staff would not allow her to seem him. After hours, she sneaks in to check on him.  He entrusts her with a rune stone, similar to the one that her brother and sister-in-law have. The man insists she keep the stone from her professor, fleeing upon seeing him at the hospital, she finds herself in the underground train tunnel project.  Holding the rune stone for dear life, she begs for it to take her to someone that can help her.

Rick is an ER doctor at the hospital.  He is surprised when he sees a woman in cosplay, demanding to see a doctor and obviously showing signs of trauma.  However, Rick tells her to talk to the front desk, though he overhears them arguing about her lack of identification, including her confusion over a social security number.  Something about the young woman stirs something in Rick, something he thought long dead.  On a whim, he takes her in when he later finds her sleeping in a doorway on his way home.  Rick is captivated by Amelia, even his dog, Rocky seems quite taken with her.  But between her odd speech patterns and mannerisms, as well as a complete lack of technical knowledge, he is compelled to help her.

Rick somehow sees past the seemly craziness and falls for Amelia. In the end, it seems they save each other. Amelia not only heals Rick’s heart, but his relationship with his family. Rick saves not only Amelia’s life but her family. It was fascinating the growth and healing they both experience along with other tenants in the apartment building.  Though the story is slow, it is passionate and heartfelt. It almost felt as if the plot of the evil professor disappeared until the end. Though they seem to save the day, the epilogue foreshadows that the evil hasn’t been completely eradicated.

The story pleasantly meanders through the spiritual healing of Rick and Amelia as they fall in love. I enjoyed their journey as well as the time traveling mythology paired with the nefarious professor. I am interested in reading the next story, especially as it appears the story-arc continues.

It’s hell in the ER, but Army veteran Dr. Rick Hauser wouldn’t work anywhere else. The hardened combat medic thinks he’s seen it all. Until she storms into his life.

Amelia Pennington is not just a pretty face. She’s a time-traveler. A medical student from 1895, forced to flee a madman. She’s been in trouble before, but this time everything she loves is at risk. Can a reluctant hero be the key she’s searching for?

What’s left of Hauser’s heart is still on the battlefield. Last thing he needs is to get tangled up with a mystery woman. But when he finds Amelia on the streets, he ignores the warning shots firing off in his head and takes her home. In less than twenty-four hours, she’s upended his self-protected world. Even his dog, Rocky, is in love.