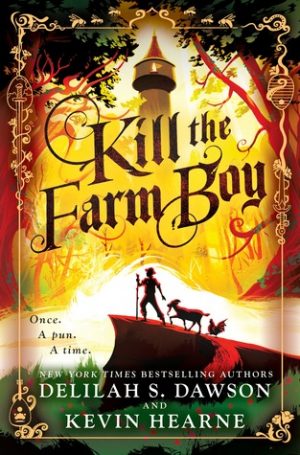 Kill the Farm Boy is a fantastical adventure filled with sarcasm, satire, and silliness. The story follows a band of misfits on their adventures to end the machinations of a not-so-nice chamberlain and his pixie accomplice. Bringing together a farm boy, female warrior, hexed peasant girl, talking goat, (mostly) Dark Lord, bumbling rogue, and a witch, the book takes the most round-about way to get to its conclusion. The odd band of adventurers have their good fortune (thanks to the Chosen One), and pitfalls (mostly due to bad timing or silly circumstances), and find themselves sidetracked more than once. I had a bit of trouble following their line of logic at times, because frankly, there isn’t a whole lot of logic involved in this tale.

The story is filled with humor, using satire, allusion, and word play to bring lightness to what, on paper, looks like a serious mission. I enjoyed it immensely, but it may not be for everyone. The world building and storytelling is very much in the vein of Terry Pratchett, where anything goes. However, just because it’s crazy, doesn’t mean it’s arbitrary. The story has some takeaways, and even a talking goat can make a good point.

While the adventure within Kill the Farm Boy is self-contained, there are several open-ended threads left hanging. It feels like the authors could take the story in one of a hundred directions, and I look forward to finding out what is in store for the heroes. Overall the book is enjoyable and funny, even silly at times. If you like Pratchett, you should definitely pick up Kill the Farm Boy.

Once upon a time, in a faraway kingdom, a hero, the Chosen One, was born . . . and so begins every fairy tale ever told.

This is not that fairy tale.

There is a Chosen One, but he is unlike any One who has ever been Chosened.

And there is a faraway kingdom, but you have never been to a magical world quite like the land of Pell.

There, a plucky farm boy will find more than he’s bargained for on his quest to awaken the sleeping princess in her cursed tower. First there’s the Dark Lord who wishes for the boy’s untimely death . . . and also very fine cheese. Then there’s a bard without a song in her heart but with a very adorable and fuzzy tail, an assassin who fears not the night but is terrified of chickens, and a mighty fighter more frightened of her sword than of her chain-mail bikini. This journey will lead to sinister umlauts, a trash-talking goat, the Dread Necromancer Steve, and a strange and wondrous journey to the most peculiar “happily ever after” that ever once-upon-a-timed.