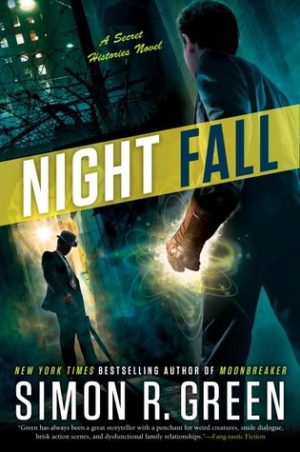 Admittedly it took time for us to get into the novel.  In the beginning it switches back and forth between the Nightside’s and the Drood’s points of view which considerably slowed the pace of the novel.  Considering the end of Moonraker we expected the novel to begin with Eddie and Molly.  However we start with John Taylor and the Authorities trying to figure out why the Nightside has suddenly expanded, pushing past its boundaries to consume part of the real world.  It isn’t something that should have ever been possible – but they need to figure out who did it and how so they can fix it.

The Droods are also concerned about the expansion of the Nightside, especially since it took the Wulfshead Club, a place where Droods conduct business and eavesdrop on everyone else’s business.  But most importantly there were Drood family members there when it went missing.  Both Molly and Eddie have friends who practically live there.  When they go to investigate, they discover that not only had the Nightside absorbed the Wulfshead Club, but a living house had eaten it, leaving no survivors.  Eddie and Molly barely escape, but it is the first step towards war between the Droods and the Nightside.

We had a hard time reading this novel.  It was incredibly difficult to follow the hell bent determination of the Matriarch’s desire to subdue and control the Nightside.  It felt like an impending train wreck in a movie: you know what is going to happen, but you cannot stop it, no matter how much you want to.  The lack of communication between the Matriarch and the Authorities, the assumptions made by the people of the Nightside, and the secret plots were all infuriating.  We watched it all come together and it felt as if we paid the price along with the rest of the victims.

Even with the difficulties, we loved being back in the world of the Nightside.  Although we are sad that this ride is over, it was lovely to see our heroes and have an additional epilogue.  We know our favorite characters will continue to live on in our imaginations.

All that we have left to say is:

From the New York Times bestselling author of Moonbreaker comes the epic final Secret Histories adventure, where the Droods will take on the most unexpected of enemies: the inhabitants of the Nightside.

The Droods are all about control, making people do what they’re told for the greater good. The Nightside is all about choice: good and bad and everything in between. The Droods want to make the world behave. The Nightside wants to party. They were never going to get along.

For centuries, ancient Pacts have kept the Droods out of the Nightside, but now the Droods see the Nightside as a threat to the whole world. They march into the long night, in their armour, to put it under their control. All too soon, the two sides are at war. It’s Eddie Drood and Molly Metcalf against John Taylor and Shotgun Suzie. The Drood Sarjeant-at-Arms and their Armourer against Dead Boy and Razor Eddie. More groups join in: the London Knights, the Ghost Finders, the Spawn of Frankenstein, Shadows Fall, and the Soulhunters. Science and magic are running wild, there’s blood running in the gutters, and the bodies are piling up.

Is anyone going to get out of this alive?