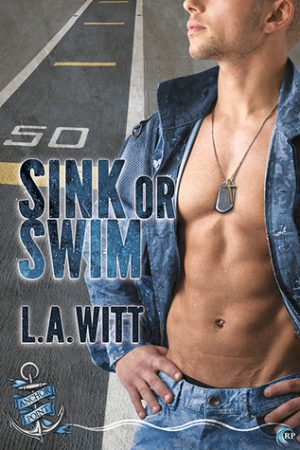 Sink or Swim
Author: L.A. Witt
Reviewer: B.
Rating: B+

As a retired Sailor—who’s also Muslim, gay, and divorced—Alhazar Bukhari has experienced plenty of static in his life. Despite the bad, however, he’s raised two loving, incredible children, remained best friends with his ex-wife, and is a source of comfort to others in need. For someone else, that might have been enough. But, having lost love once, he’s hoping for another chance. He just didn’t expect to want it with a Protestant chaplain.

Having recently escaped an abusive relationship that lasted for eight, long years, Chaplain Dylan Pedersen is empty. Weary, starving for affection, and terrified on several fronts, he’s kept his encounters as anonymous as possible, praying for things to get better for himself in secret, while providing counseling for others for the Navy. The arrival in the ship’s chapel of the gorgeous, understanding electrician seeking a safe space to do his salat wasn’t at all what he wanted. But, if he can allow himself to trust again, just a little, it might be exactly what he needs.

More than was true of the previous titles in this series, Sink or Swim covers a lot of ground. Once again expanding on the troubles facing LGBTQ personnel in the Navy, it explores religious intolerance, interfaith relationships, sexism, assault and intimidation in the military, other forms of abuse that don’t involve visible bruises, the conflicts that might arise when considering faith vs. human (including physical) needs, and so on. Every one is important, and I agree with the characters that it’s dumbfounding that so many of these issues continue. Addressing them all in a single story was likely a daunting exercise, and, while it overwhelms the narrative on occasion, I think these points ought to be reinforced.

Among the most interesting aspects of the story was the attitude Alhazar and Dylan have regarding their respective religions. Both are devout, both rely on their faith to guide them, yet each has found ways to (usually) balance that devotion with their own humanity—Alahzar, especially. I appreciated seeing two characters exploring their affection for one another, including sex, without that faith dominating every other aspect of their situation.

Another important point made in Sink or Swim is that the way an individual deals with the troubles in their life is a personal, unique, and valid thing. While, in some cases, it might be comforting or therapeutic to share our sorrows with others, it can be harmful, if not dangerous, to quantify and compare them. The concepts of coping and healing are far too complex for such generalizations, and I believe the author successfully presents a case for that fact here.

The Anchor Point series has covered quite a few stories since the beginning, and Sink or Swim goes a long way in tying everything together. Part reunion, part continuation, it catches long-term followers up on the happenings of previously introduced couples, while serving as a reminder that there’s still work to be done. While I did get stuck on one or two parts of the narrative, I enjoyed Alhazar and Dylan’s story a great deal. While new readers should be able to read Sink or Swim on its own, there are so many other characters and narratives leading up to it that I strongly recommend reading the series in its entirety. And, despite the number of offerings so far, I wouldn’t mind visiting the Anchor Point series again.

Alhazar Bukhari spent his Navy career in the closet. Now he’s retired, divorced, and hungry for the love he’s never had a chance to experience. He tries to put his faith in Allah to bring the right man into his life, but it’s hard to be patient after all this time.

Chaplain Dylan Pedersen spends his days counseling Sailors, and his nights with men he doesn’t know. Months after finally escaping an abusive relationship, he’s terrified of anything more than a physical connection. Maybe it’s a sin, but he’s too lonely to not let men into his bed, and too scared to let them into his heart.

When Alhazar’s civilian job brings him aboard the USS Fort Stevens, and his daily prayers bring him into Dylan’s chapel, the chemistry is instantaneous. Sex and friendship quickly evolve into more, but Dylan’s too haunted by his recent past to be the man Alhazar wants. Alhazar needs love, Dylan needs time, and if they can’t find some sort of balance, they’ll sink before they ever have a chance to swim.