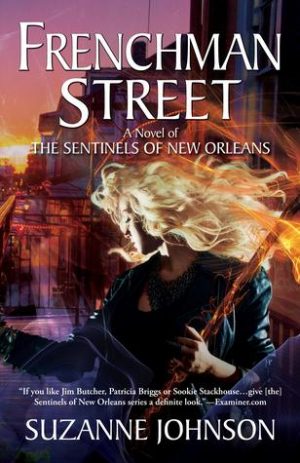 When we landed in the Rivendell transport, a late-night fireworks show was booming in the direction of downtown New Orleans. Bright stars and exploding balls of light and whizzes and booms lit up the night sky, making the streetlights outside seem like lightning bugs.

A bellow, much closer to us, followed the noise, then a growl from what sounded like a big, unhappy animal. Voices rose in panic outside, and a gunshot echoed through the neighborhood.

“What the hell? Wait here.” Rand dropped my hand and rushed out of the transport into the darkened greenhouse.

He flipped the lights on and ran into what had been the storefront section when this had been a thriving nursery. The front office had once housed a counter, cash register, and shelves filled with garden ornamentals—flags and decorative pots and mirror balls and painted gnomes.

Jean and I followed Rand into a space now empty except for an intricate iron wall stretched across the former storefront. Wrought iron to keep out faeries.

I notice Rand’s expression of pure fury before I saw what had caused it.

A winged, nickel-and-gold lizard the size of a school bus stood in the middle of Magazine Street. Despite it being after midnight, a crowd had gathered and traffic was jammed, including a freaked-out NOPD officer standing beside his squad car, shouting into the radio attached to the collar of his uniform.

The dragon sent a bellow of steam into the crowd, which resulted in shrill screams and a scattering of bodies.

“Dru, do something. Get rid of these people.” Rand’s voice was frantic.

Me? When did I assume dragon patrol? “What do you mean, do something? I don’t have anything that would neutralize a crowd this big.” There had to be at least 50 people out there.

I thought furiously. “Can you communicate with the dragon?” I mean, he was a fire elf, and all the dragons left in the world lived in Elfheim, or so he claimed.

“Maybe. Should I have her burn them?”

I punched him on the arm as hard as I could, but it worked. He finally settled down and turned his attention to me. “What was that for?”

“Don’t burn the humans. Tell the freaking dragon to head toward the river. I’ll go back to that vacant lot on Tchoupitoulas and create a transport. Where in Elfheim can I send him?”

“Her. Melanwahr. I recognize her. Send her to bae’r ddraig.

“Okay, talk her through it.” I practiced saying the words a few times, and pulled Charlie out of the messenger bag, along with a jar of sea salt. “Send her down Arabella Street—it won’t have much traffic. I’ll set up the transfer.”

“We’ll deal with them once we get her to safety. Jean, back me up.”

I didn’t wait for Rand to unlock the door set into the iron wall, but zapped it with my own physical magic, then Jean and I slipped out. Rand stood in the doorway, head down, concentrating, and it must have been working. Melanwahr had settled down and was watching him intently.

“Come on. We need to run faster than the dragon.” I grabbed Jean’s arm, and we raced around the corner and headed for the Mississippi River. The vacant lot was pitted and muddy, its sparse grass brown. But it should be big enough.

“I know you have a gun, so cover me while I lay out this transport. Don’t kill anybody, but injure them if you have to.”

“Jolie, perhaps the dragon could be kept here, to fight.” Jean wore his pensive, plotting expression. “I think Florian should not like to meet a dragon.”

“Then we’ll bring them together for a jazz brunch one weekend—quit dawdling.”

The uneasy truce between the preternatural species of New Orleans has shattered, with wizards and elves, shifters and vampires—not to mention the historical undead—struggling for ultimate control of the city, including the humans who still think they’re atop the food chain.

They aren’t, however—and the Summer Prince of Faerie wants them to know it.

Stuck in the middle? One unemployed wizard sentinel. For DJ Jaco, war makes for strange bedfellows as she finally embraces her wizard-elven heritage and strikes a deal with the devil so she and her ragtag band of allies can return to defend her hometown. After all, when the undead French pirate Jean Lafitte has been hired by the mayor as a consultant, things could go horribly wrong.

War is coming to New Orleans just in time for Mardi Gras, with the elves and wizards lined up on opposite sides, the shifters without a leader, the vampires promising loyalty to the highest bidder, and the soul of the Crescent City resting on the outcome of the civil war going on in Faerie between the rival princes of summer and winter.

Mardi Gras Day is approaching fast, the much-anticipated new Krewe of Enyo is not what it seems, and the line between friends and enemies grows thin as DJ tries to stave off open warfare between faeries on the St. Charles Avenue parade route.

Laissez les bons temps rouler…but be careful, or the good times might roll too close for comfort.