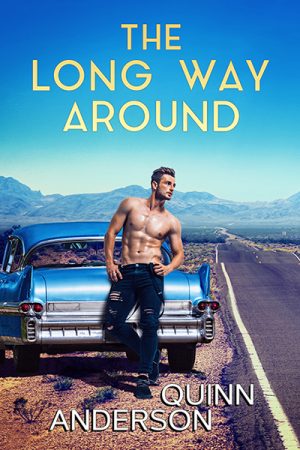 I’m Quinn Anderson, author of Fourteen Summers and the Murmur Inc. series. Welcome to my blog tour for The Long Way Around! Stay tuned to get fun facts about this release, learn about our leading men, and hear about the many road trips I took in my antique car, Lou. Leave comments for a chance to win a $10 Riptide gift card. I look forward to chatting with you all!

About The Long Way Around:

Sam Cooper is the definition of an introvert: shy, bookish, and the sort to think a wild Friday night involves ordering takeout. He enjoys his quiet life, but after a bad breakup, he’s been yearning for a change of scenery. Luckily, his best friend and former college roommate has the solution.

Wesley Reed—a jokester and expert Sam-handler—proposes an epic road trip to a wedding across the country. They’re both between jobs and boyfriends. Why not hit the open road and make some memories?

Stuck in close quarters for the first time since their dorm days, they’re both surprised at the heat that springs up between them. As best friends, they’ve shared so much over the years, so why does sharing a hotel room—and occasionally a bed—make them want more? Chemistry this smoldering is hard to ignore, but there are road blocks to their romance. Wesley’s keeping a secret, and Sam can’t rely on Wesley to drag him out of his comfort zone forever. If they’re not careful, their relationship may take the ultimate wrong turn.

Quinn Anderson is an alumna of the University of Dublin in Ireland and has a master’s degree in psychology. She wrote her dissertation on sexuality in popular literature and continues to explore evolving themes in erotica in her professional life.

A nerd extraordinaire, she was raised on an unhealthy diet of video games, anime, pop culture, and comics from infancy. Her girlfriend swears her sense of humor is just one big Joss Whedon reference. She stays true to her nerd roots in writing and in life, and frequently draws inspiration from her many fandoms, which include Yuri on Ice, Harry Potter, Star Wars, Buffy, and more. Growing up, while most of her friends were fighting evil by moonlight, Anderson was kamehameha-ing her way through all the shounen anime she could get her hands on. You will often find her interacting with fellow fans online and offline via conventions and Tumblr, and she is happy to talk about anything from nerd life to writing tips. She has attended conventions on three separate continents and now considers herself a career geek. She advises anyone who attends pop culture events in the UK to watch out for Weeping Angels, as they are everywhere. If you’re at an event, and you see a 6’2” redhead wandering around with a vague look on her face, that’s probably her.

Her favorite authors include J.K. Rowling, Gail Carson Levine, Libba Bray, and Tamora Pierce. When she’s not writing, she enjoys traveling, cooking, spending too much time on the internet, playing fetch with her cat, screwing the rules, watching Markiplier play games she’s too scared to play herself, and catching ’em all.

To celebrate the release of The Long Way Around, Quinn is giving away a $10 Riptide credit! Leave a comment with your contact info to enter the contest. Entries close at midnight, Eastern time, on August 11, 2018. Contest is NOT restricted to U.S. entries. Thanks for following along, and don’t forget to leave your contact info!

This giveaway is sponsored by the publisher/author. Open to participants who are legally allowed to participate in such a contest as allowed by their local laws. All federal, state, local, and municipal laws and regulations apply. Void where prohibited. No purchase necessary. By participating in the contest, participants agree to be bound by the decisions of the contest sponsor. Prize will be delivered by the contest sponsor. This blog, its reviewers, and the owner are not responsible for items lost in the mail. By entering this giveaway, participants agree to abide by these terms.