Please welcome friend and fellow blogger, Liza, who has today’s review. This review was originally published at Blogging by Liza on August 29, 2018. 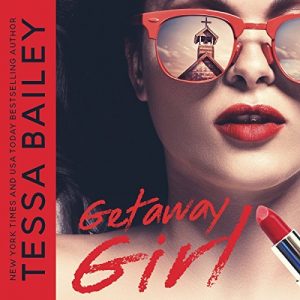 Somehow Getway Girl is the first book I’ve read/listened to by Tessa Bailey, but it definitely won’t be the last. I was pulled in from the very beginning and the story kept me wanting more the entire time.

I absolutely adored Addison Potts from the very beginning. She is such a strong and take-charge woman. Yes she totally can be venerable at times, but that just made me love her more. I love as soon as she sees Elijah she is completely struck by him. When Addison’s cousin, who was to be Elijah’s bride doesn’t show up, Addison is the one who offers him a ride to getaway from the wedding.

Elijah Montgomery Du Pont had his life all mapped out when his bride to be left him at the alter. Now the hopeful future mayor of Charleston has finally found the first place that feels like home in Addison’s apartment. I loved how quickly Elijah and Addison connected as friends even as they were both fighting an attraction to one another in the beginning. Their banter was laugh out loud funny at times, and I loved they each seemed to bring the best out in one another.

I was waiting for them to finally act upon their attraction and have to say it was more than worth the wait! OMG they had smoking hot chemistry and I loved they couldn’t keep their hands off each other once they finally took that next step.

I have to say I really didn’t love how Elijah’s family acted when it came to Addison, but I loved that Addison never changed who she was for anyone. I was afraid the fact that Elijah was engaged to Addison’s cousin would be a big issue in the long run, but I loved how everything worked out.

Getway Girl was done with dual narration based upon the point of view of the chapter, and both Joe Hempel and Lori Prince did a wonderful job with the narration. I felt like they each flowed flawlessly with both Addison and Elijah’s voices as well as all the other characters. I had no issue going between the two narrators as they changed from chapter to chapter.

After a six-year absence, Addison Potts is back in Charleston to stir things up. And what better place to make her villainous return than her estranged cousin’s wedding? Only, the nuptials hit a snag when the bride doesn’t show, leaving Addison to play getaway driver for the jilted groom. A groom whose heartbreaking smile and deep, southern drawl she should not be noticing…

Elijah Montgomery Du Pont is the future mayor of Charleston. From his military career to city hall, every detail of his life has been meticulously planned. Until now. His only respite from life’s sudden upheaval is Addison, his new, improbable best friend. She makes him happy. Grounds him. And public disapproval be damned, he’s not willing to give her up. But with an election on the line and public pressure rising, Addison—and the cruel hand of fate—might not give him a choice.