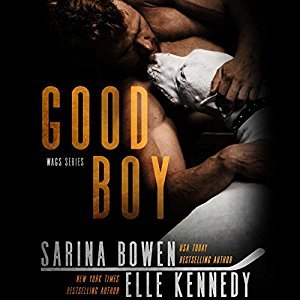 Jess Canning is struggling to find her path in life. Planning and hosting her brother Jamie’s wedding to NHL superstar, Ryan Wesley, helped her realize party planning isn’t the job for her. After determining that her life’s calling is to be a nurse, Jess is relieved to earn a scholarship to the Smith Nursing school in Toronto.

After hooking up with his best friend’s little sister not once, but twice, Blake Riley realizes for the first time in five years, he wants more with a woman than a one-night stand. He’s into Jess, so when she moves to Toronto, he makes it his mission to woo her into being his girlfriend.

Good Boy is the wonderful followup to the amazing two-book Him series. I love that the authors did this spinoff starting with Blake and Jess – especially with Wes and Jamie’s wedding kicking off the title. The wedding helps transition nicely from the Jamie-and-Wes centric stories, to focus on Wes’s teammates. I love that they the pair is still a significant part of the book, but as the story unfolds, the focus is truly on Jess and Blake.

I already liked Blake from the previous book, but after Good Boy, I’ve fallen hard. He’s got such a heart of gold, but he’s cocky and playful. He pushes, but knows when to back off. He makes me laugh. He’s the kind of character you want as your own best friend. Whether hanging with his teammates, romancing Jess, or skating on the ice, Blake is always true to himself and those around him.

Jess and Blake make a great pair. They start off as “frienemies” with their chiweiler hookup (a hilarious scene from Us), and I was worried I would be annoyed with Jess. She wants Blake, but is horrified by that, so she is a bit rude to him. But he takes it all in stride, confident she likes him, and wears her down. He knows just how to be there for her when she needs it. I really like how the story is all about them coming together – getting over their own hurdles. It’s gradual and real, rather than all at once. Love sneaks up on them.

Teddy Hamilton and Tanya Eby are two narrators I’ve enjoyed listening to recently. Mr. Hamilton voiced the part of Jamie in the previous two books, and I recently listened to another contemporary romance by Ms. Bowen, that was also narrated by Ms. Eby. Because I had heard both narrators play other parts just before listening to Good Boy, I kept thinking of the other characters while listening to this one. While it gave some familiarity to the tale, it was also a little confusing for me. However, they are both strong, talented performers, creating fitting voices for the two main characters. My only issue with Ms. Eby is that I didn’t care for her versions of Jamie and Wes because I’m so used to the other narrators’s versions. And while I liked her Blake, I did have trouble at times distinguishing between her male voices.

Although the WAGs series, starting with Good Boy, is a spinoff of one of my favorite series, you do not have to read Him or Us prior to starting this one. Blake and Jess are a fabulous couple and the book is a lot of fun. I am so glad the authors continued what they started in Him and opened it up to this larger world.

Hosting her brother’s wedding for an MVP guest list is the challenge of Jess Canning’s life. Already the family screw-up, she can’t afford to fail. And nobody (nobody!) can learn of the colossal mistake she made with the best man during a weak moment last spring. It was wrong, and there will not be a repeat. Absolutely not. Even if he is the sexiest thing on two legs.

Blake Riley sees the wedding as fate’s gift to him. Jess is the maid of honor and he’s the best man? Let the games begin. So what if he’s facing a little (fine, a lot) of resistance? He just needs to convince the stubborn blonde that he’s really a good boy with a bad rap. Luckily, every professional hockey player knows that you’ve got to make an effort if you want to score.

But Jess has more pressing issues to deal with than sexy-times with a giant man-child. Such as: Will the ceremony start on time, even though someone got grandma drunk? Does glitter ever belong at a wedding? And is it wrong to murder the best man?