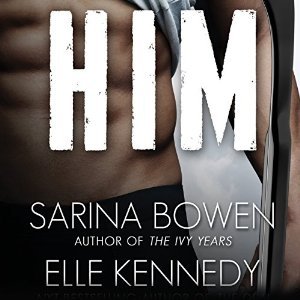 As teens attending a hockey elite camp each summer in Lake Placid, Ryan (Wes) Wesley and Jamie Canning became the kind of best friends that are forever. However, Wes harbored a secret: he loved Jamie as more than friends, and one night, their last night at camp ever, Wes pushed things a bit too far.

Four years later, the pair haven’t spoken throughout their college careers, and Jamie never figured out what he did to lose Wes as a friend. Running into one another at the NCAA Frozen Four championships allows the pair to start a new friendship. Yet working together as coaches at the place where their friendship all began gives this pair time to reflect on what they really mean to one another.

I don’t know if I can adequately express my affection for Wes and Jamie and their beautiful relationship. Him is one of my favorite books; it hits every emotional note and has a wonderful happy ending. But the journey to get to that happy place is filled with bumps and tears, as well as some smoking hot sex.

Right from the start, I absolutely adored Jamie. He is genuinely hurt and angry that Wes abandoned their friendship over a little sex. He doesn’t care why the sex happened or that Wes is gay. He’s hurt at how little Wes thought of him. This sets up the type of man Jamie is, and I only became more and more impressed as the book continued. Always laid-back, the biggest worry he has is wondering why he isn’t freaked out that he is attracted to his best friend. Jamie is a rock; someone who thinks things through rationally. I loved getting a glimpse of his introspection regarding his sexuality, his career, and life in general.

On the other hand, it took me a little longer to warm up to Wes. I loved his character, but it took time to see how much he has always loved Jamie, and how the genuine fear of losing him, or seeing disgust rule Jamie’s actions, controls Wes’s thoughts and actions. He adores Jamie so much, that he is willing to take whatever Jamie is willing to give, yet never seeing beyond the surface out of these fears. Thank god Jamie is a better man, who is willing to push Wes until he sees clearly.

As a huge fan of Elle Kennedy’s college hockey centric, Off-Campus series, the opening cadence of both Ryan and Jamie felt utterly familiar, as if the two were teammates with the guys from Briarwood. Both narrators feel at home with the cocky college hockey player vibe. And I can’t believe neither were narrators in the Off-Campus series. Initially, I felt the narrator for Jamie was a bit stronger. He shared more emotion in his performance. However as the story went on, I grew to appreciate how the narration for Wes deepened and matured, just as Wes does. I don’t know which narrator portrays which character, but both did a wonderful job, and I loved having two different and distinct voices for the two different POVs.

In the end, I absolutely loved Him in all aspects. And I am super excited that there is a second story, Us, which continues to follow Wes and Jamie as they begin their life together as a couple. Him is an amazing love story about two best friends who find powerful love. Filled with all sorts of smoking hot sex, the story is emotionally raw at times but never too rough, with an HEA at the end.

Him is one of my

They don’t play for the same team. Or do they?

Jamie Canning has never been able to figure out how he lost his closest friend. Four years ago, his tattooed, wise-cracking, rule-breaking roommate cut him off without an explanation. So what if things got a little weird on the last night of hockey camp the summer they were eighteen? It was just a little drunken foolishness. Nobody died.

Ryan Wesley’s biggest regret is coaxing his very straight friend into a bet that pushed the boundaries of their relationship. Now, with their college teams set to face off at the national championship, he’ll finally get a chance to apologize. But all it takes is one look at his longtime crush, and the ache is stronger than ever.

Jamie has waited a long time for answers, but walks away with only more questions—can one night of sex ruin a friendship? If not, how about six more weeks of it? When Wesley turns up to coach alongside Jamie for one more hot summer at camp, Jamie has a few things to discover about his old friend… and a big one to learn about himself.