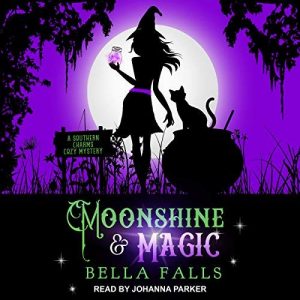 Moonshine and Magic, the first title of a quaint, paranormal cozy mystery series, centers on the return of Charli Goodwin to her hometown of Honeysuckle Hollow, a place where non-humans can live together peacefully. Charli is a witch with an rare talent for finding misplaced items and people. She abruptly left Honeysuckle Hollow, and her finance, roughly a year ago, and her return goes a bit south when first her ex-finance proposes to her bratty cousin in front of the entire town, followed by Charli’s discovery that her favorite uncle is dead.

Moonshine and Magic was a rough start for me. First I was confused as to how long Charli was gone from her hometown. At times it was “forever ago,” but then “not that long ago.” Additionally, Charli came off selfish, not telling her loved ones that she was leaving or where she went. Additionally, I had issues with her older brother, who in his effort to “protect” Charli, was pushy, vague, and unable to stand up to the “paranormal police” when Detective Mason went after her for her involvement in her uncle’s death. The mystery was slow starting and I found myself annoyed with the characters.

However, after taking a short break, I jumped back into the audiobook and found it more appealing. Once things settled in and other characters introduced, the mystery of who killed Uncle Tipper picked up speed. Charli is in the middle of it all, and has a few stumbles before capturing the culprit. And although several characters are somewhat stereotypical (bitchy aunt and stuck up cousin, alpha males, potential love triangle, etc.), I grew to like them and enjoyed the story. My biggest issue with Charli is that she got precariously close to “too stupid to live” territory when her stubborn behaviors nearly killed her three separate times.

The narration by Johanna Parker took me a bit to get used to, but only because I have been listening to her read the SPI series by Lisa Shearin, one of which I completed just before starting Moonshine and Magic. This caused some mental confusion for a good quarter or more of the book, thinking I was listening to Mak (SPI) instead of Charli. However, once I finally got into the story and warmed up to the characters, I found Ms. Parker’s performance enjoyable and well-suited for the story and setting. She conveys a charming southern attitude, which fits the small town of Honeysuckle Hollow. She is able to put a bit of desperation into Charli when needed, but generally keeps her voice calm and steady. The supporting characters each have their own unique voice, some of which are a bit odd, but once again, fitting to the unconventional cast of paranormal characters that inhabit the story.

Overall, I enjoyed Moonshine and Magic, even with the rough start and my few misgivings. The author set the stage for conflict and intrigue for any upcoming tales, and after warming up to Charli, I look forward to uncovering more mysteries with her.

Story: B-
Narration: B

Charli Goodwin doesn’t expect her homecoming to go without a hitch–after all, she skipped town, leaving her fiancé and family without a clue as to where she was going or why. Now that she’s ready to return home, she plans to lay low and sip some of her Nana’s sweet tea while the town gossips come out to play.

Unfortunately, on her first night back, Charli discovers the body of her crazy great-uncle, and suddenly finds herself at the center of a mystery that threatens the very foundations of Honeysuckle Hollow and the safety of every paranormal citizen in it–starting with Charli herself.

With the clock ticking, will Charli’s special magical talents be enough to save not only the town but also her own life?