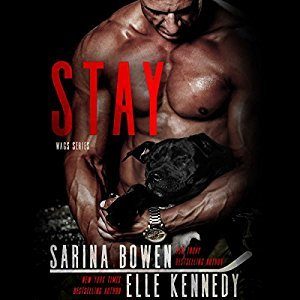 Hailey Taylor Emery co-owns a thriving startup “go-for” company with her ex. Hailey is a huge Toronto Maple Leafs fan, and is a bit flustered to discover her long-time celebrity crush, Toronto forward Matt Erikkson, is one of her clients. She is even more discombobulated when he refers to her as “hottie” and invites her to a game.

Over 18 months ago, Matt’s wife insisted on a divorce, and he’s still feeling the impacts. His ex convinced him that being a professional hockey player and having a long-term relationship can never work. However, after meeting Hailey, Matt is considering putting his heart out there again.

I absolutely adore the Him/WAGs world that Ms. Bowen and Ms. Kennedy have developed over the course of three books. This is the first story that wanders away from the “original” characters and family, and the authors do a great job transitioning the focus to Wes and Blake’s teammates. Overall, I enjoyed Stay, and found Matt and Hailey to be an adorable and sexy couple. With that said, I also had a few hiccups with the story and Hailey, which made it not quite as amazing as the previous three books.

As I mentioned, I enjoyed Matt and Hailey together. Their playful banter, especially as translated through texting and messenger apps, is fun, and it allows the couple to get to know one another in a safe place. And once they become a couple, I loved watching them grow, especially Matt. I also love the WAGs supporting characters, who add dimension to the story. And there are some fabulously hilarious moments… just think “junk selfie in a public restroom”!  I do really like it when it’s just the two of them getting to know each other, spending time together and with the team.

However, I did struggle a bit with the first half of the book. First because I didn’t care that much for the female narrator (discussion below). Second, I couldn’t get 100% behind Hailey. She’s unsure and uncertain, and it made it difficult for me to cheer for her. Third, the ex situation on both sides adds too much tension, making parts of the story very combative. Finally, I had a big issue with a conflict that came up regarding client confidentiality. It is a serious thing, and I felt Hailey, the OWNER of the business, took it way too lightly!

As far as the narration, Ms. Rivers excels when portraying Hailey, although it was a tab bit slow at 1.25x. And her female characters are good, but sometimes they felt forced – in that she was working too hard to create different voices from the norm. However, her male voices sound just like a goofy teenage character from a cartoon show I used to watch, and that is all I heard every time she performed any male character, to include the lead. That took me out of the story too often. On the other hand, the male narrator is the same who voiced Wes in both Him and Us. While it was a bit confusing at first (because I kept thinking it was Wes speaking), once the story progressed, it worked well. I really like Mr. Morgan’s voice, and felt he does a great job with a multitude of characters. He also brings solid emotion to Matt, who is struggling to figure out his life.

In the end, I’m giving Stay a B rating, whereas normally a book that has a few issues would get a B-. I liked Matt and Hailey together, especially for the second half, after she got over her nervousness and committed to the relationship. The couple clicked, creating a strong romance and finish to the book. I just adore this world, and hope the authors give us more stories soon!

Can you fall in love with someone you’ve never even met?

Although it’s against the rules for her to check his file, she’s 95% sure she spends at least part of each day texting with her lifelong crush and catering to his every need. Still nursing a wounded heart thanks to her recent breakup, Hailey is perfectly content with some harmless online flirting… until she has to meet her client. Face to face. Cue: utter panic.

Matt Eriksson is no stranger to heartbreak. He’s still not over the destruction of his marriage, and it sucks to be the only guy on the team who knows the truth—that hockey and long-term relationships are a toxic mix. He barely sees his kids, and dealing with his ex makes him feel insane. The only person in his life who seems to understand is someone who won’t show her pretty face.

But it’s nothing that a pair of fourth row hockey seats can’t fix. Hailey can’t resist the offer. Matt can’t resist Hailey. Good thing he doesn’t have to. Fire up the kiss cam!