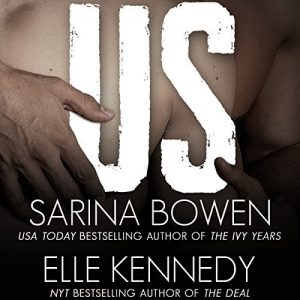 After absolutely loving the friends-to-lovers story of Him, I had mixed feelings going into Us. Of course, most of me wanted more of Jamie and Wes, but part of me was worried how the authors could possibly measure up to the original tale, or what horrible things would they do to this couple just to get a story. Whatever my trepidations, thank God the authors wrote Us, and I am seriously glad I listened to it!

Starting about five months after the conclusion of Him, Wes and Jamie are living and working in Toronto. Because of Wes’s high-profile job with the Toronto Maple Leaves, the couple keeps quiet their relationship. But the time apart and the need to hide their love starts to take a toll on the couple, and finding their way out of the darkness is made harder when Jamie gets ill.

Us is the wonderful story of a great couple dealing with everything that comes after the HEA ending. Rather than mundane or routine, the authors give readers a heartfelt look at what happens to couples after the initial magic is worn down due to everyday life. My heart hurt for both Jamie and Wes as readers experience both sides of communication breakdowns and rough patches of life. But the book isn’t all about what can go wrong; instead the focus is on getting it right. The couple has ups and downs, but whereas so many couples would break up or walk away, this couple learns to deal and adapt because of their love.

Adding so much to this story is Wes’s teammate, Blake Riley, who moves in upstairs from the couple when they are still hiding their relationship. Defying stereotypes and even expectations, Blake is an intense ball of crazy energy, and one of the best friends a person could ask for. Instead of being a dumb, homophobic jock, Blake has an immense heart and childlike wonder. As the story moves forward, I seriously fell in love with Blake, and my day was made when I found out he gets his own story (Good Boy, WAGs series).

Once again, this amazing story is made all the more real because of the incredible performances of both narrators. Mr. Hamilton as Jamie and Mr. Morgan as Wes, I’ve come identify their voices with their characters over the course of two books. Both men are able to bring true emotion to their characters, from joy to sorrow, from times of sexy to times of illness. They both sound like your typical guy/jock, but stretch to cover a wide cast of characters, including Jamie’s family.

In the end, Us is just as amazing as its predecessor, and together, the two books give the whole story. Wes and Jamie experience that special, hard-to-find love and don’t give up when things get hard. While their world is probably a bit idyllic, I don’t mind. I like that they didn’t have to deal with one hundred problems and could focus on being a couple.

Story: A
Narration: A (both)

Five months in, NHL forward Ryan Wesley is having a record-breaking rookie season. He’s living his dream of playing pro hockey and coming home every night to the man he loves—Jamie Canning, his longtime best friend turned boyfriend. There’s just one problem: the most important relationship of his life is one he needs to keep hidden, or else face a media storm that will eclipse his success on the ice.

Jamie loves Wes. He really, truly does. But hiding sucks. It’s not the life Jamie envisioned for himself, and the strain of keeping their secret is taking its toll. It doesn’t help that his new job isn’t going as smoothly as he’d hoped, but he knows he can power through it as long as he has Wes. At least apartment 10B is their retreat, where they can always be themselves.

When Wes’s nosiest teammate moves in upstairs, the threads of their carefully woven lie begin to unravel. With the outside world determined to take its best shot at them, can Wes and Jamie develop major-league relationship skills on the fly?